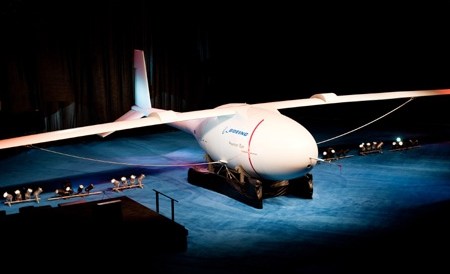 What’s with the ominous names for these things? You’ve got the Predator, the Taranis, the EATR, and now the Phantom Eye? I guess there’s a bit of psychological warfare going on there. You don’t want the enemy to look up and say “Maybe we shouldn’t… what if there’s a Model BAE-2455G up there somewhere?”

So when Boeing unveiled their new unmanned high-altitude aircraft, they had to go with Phantom Eye. Sounds like an enemy from Secret of Mana. The part of Boeing that made it is even called Phantom Works. Actually, I know someone who worked there, and she said it wasn’t as cool as it sounds.

The craft has a 150ft wingspan and the big bulb is its liquid hydrogen tank that powers (or cools) its engines — kind of a liability if you’re in bullet range, but at 65,000ft I don’t think there’s much of a risk. Eventually it’ll be able to stay in the air for four days at ~170MPH, giving it a range of… (calculator app) 16,000 miles. That’s a lot of miles. A commenter notes that they’re almost certainly not telling the truth about their propulsion method, so there’s that to consider as well.

More info over at Boeing.