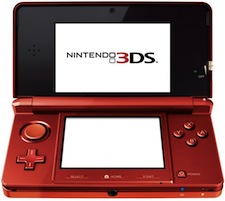 Hideki Konno, the game producer for the upcoming Nintendo 3DS platform gave a rare interview at E3, and shared some very interesting information about how exactly the new handheld device will work. It was interesting to read that Nintendo has been considering 3D gaming for years, but only now (excepting the failed Virtual Boy) felt that the technology was ready.

Apparently, the new 3D display is based on some rather old technology — what’s commonly known as a lenticular sticker, which changes appearance depending upon the angle you view it from. Obviously, the 3DS will be more advanced then a sticker, but that’s where the basic concept comes from. Konno also revealed that game data will be stored inside handheld, instead of in the game cartridge as has been done previously. Mr. Konno revealed that both he and Miyamoto were insistent that the new device have an analog control, which has been missing from Nintendo’s previous portable devices.

Get ready for motion with the 3DS as well, since the device will contain both an accelerometer and gyroscope, allowing for games similar to the Wii MotionPlus device. Mr. Konno suggested that they could be used for games such as first person shooters, allowing the user to move the device to maintain line of sight, without losing the 3D experience.