Okay, the future is officially here. A few days ago, the team from Mountain View-based startup Anybots swung by TechCrunch headquarters to deliver a special new addition to our office: Anybots robot model QB, which stands around five feet tall and can zip around the office at 3.5 miles per hour on a pair of sturdy wheels. It looks like a cross between a Segway and E.T., with some optical sensors and cameras making up its ‘face’. Oh, and it’s currently being controlled by my boss, Michael Arrington, who has been using it to remotely roam the TechCrunch office to make sure we’re working hard while he’s up in Seattle. At least, that’s what he’s supposed to be doing — he’s spending most of the time gleefully running over our feet as he blinds us with a green laser beam. The future really is amazing.

In the video above, Mike takes control of QB via an internet browser to help me interview Anybots robotics engineer Daniel Casner.  And by help, I mean he shows us what happens when you drive the robot directly into a wall and repeatedly bump into Daniel in an attempt to get him to spill Anybots secrets (it didn’t work). Note that the little wire hanging down from the robot’s head is actually a microphone that’s transmitting to our camera. 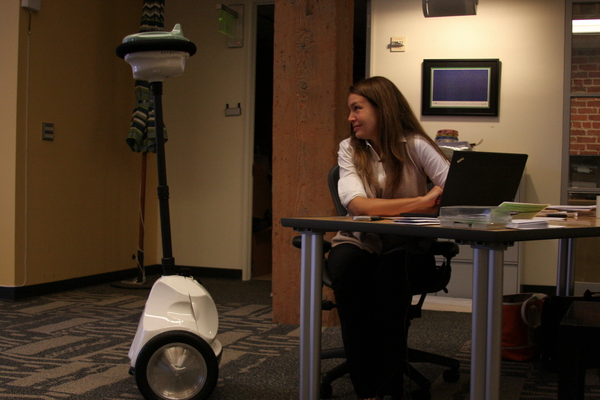 The Anybots robot has been in development for years — the company was started back in 2001 by Trevor Blackwell (who is also a Y Combinator partner), and the growing team has since iterated through several models. The flagship model QB, which is slated for release this fall, will sell for $15,000 per unit. That may sound a little steep, but keep in mind that the robot can be used by multiple people, though only one can be logged in at a time. And no, we don’t get to keep this one — it’s on loan for a week.

Using the robot is actually remarkably easy: after creating account, you install a Firefox plugin and head over to the Anybots homepage, where you’ll see a list of the Anybots you’re authorized to control. Click on one, and you’re in the pilot’s seat — QB will stream a video feed of what it “sees” to your monitor, and it features a microphone and speaker so you can talk with people around the office.

Moving around is intuitive, too: the up arrow moves the robot forward, left and right arrows to the side, and so on. You can also click anywhere on the video stream to activate and point a built in laser pointer. It took Mike all of two minutes to figure out how to weave between our office desks.

Some other key stats: Anybots says that the robot lasts 6-8 hours on a single charge. When it dies or is powered off manually, a little kickstand will pop out of its rear to hold it upright. And the device only weighs 35 pounds, so it isn’t going to hurt anyone.