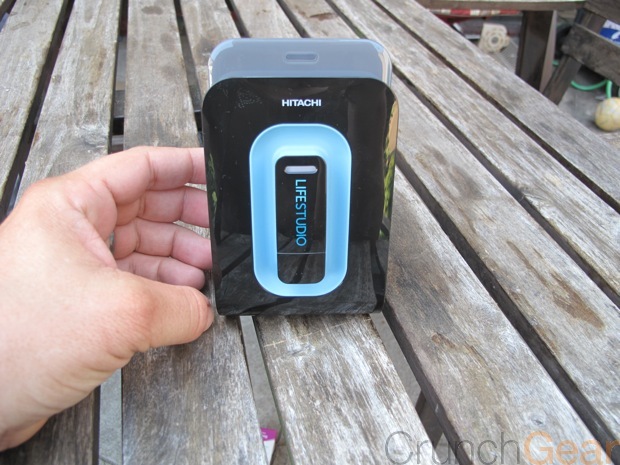 The Hitachi Life Studio is supposed to be the next generation of portable drives. Aside from the odd addition of a magnetic flash drive to the front of the case, this clever little drive includes media management software from Cooliris that essentially offers an “easier” way of browsing all the media on your computer.

The drive also includes Hitachi’s own back-up software, although you can simply format the drive and turn it into a Time Machine back-up volume.

What sticks in my craw, however, is the the Life Studio software. The software does two things specific to your life: it finds all of the images on your hard drive(s) and shows them to you using an odd spacial interface and it shows you all of your Facebook photos in one place. That’s basically it. The rest of the features are actually links out to web-based media services. It has some wonky music service feature as well as a direct line to Hulu. That’s right: Hitachi is basically flogging Hulu to “household memory managers” or whatever they’re calling soccer moms who are nominally in charge of going through all of the digital pictures of junior covered in chocolate pudding these days.

Generally, Life Studio is some sort of strange amalgam of media viewer and web services wrapper that is useful for only the most hopelessly bored Internet user. Considering the only time you would ever interact with the Life Studio software is after going through a bit of rigamarole to install it, I suspect it will reside, quietly, on thousands of hard drives, unused. 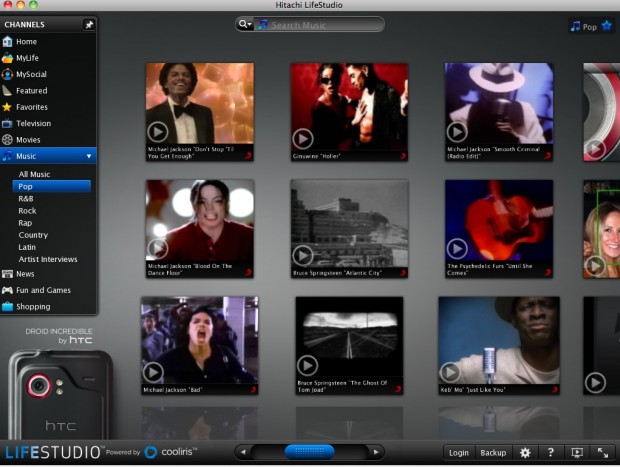 What’s the Music tab? Why that’s a collection of Michael Jackson videos. Glad you asked!

Generally, however, you’re dealing with an interesting hard drive product suffering from overreach. The detachable 2GB USB drive is a clever touch and the model we tested, a 500GB version, costs $139. A 1TB desktop versions cost $129 while the plus – including the little USB key – costs $20 more.

An added bonus? The Life Studio name reminds me of this song.

These drives will be available mid-July.