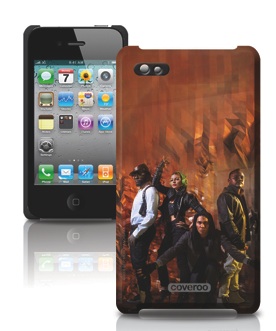 Some people like to put tattoos on their body, others like to put Coveroos on their phones. Coveroo puts a custom engraving on the back of your mobile phone or case. The company just closed a Series B funding, led by Rembrandt Venture Partners. Consor Capital and CEO Karl Jacob also put in some money.

About 18 months ago, Coveroo rose from the ashes of Wallop, a defunct social networking site where Jacob was also the CEO. Instead of giving up, he pivoted and created a business around personalizing the personal, but largely lookalike, tech we all carry around in our pockets. The company did a reboot with a new $1.5 million Series A in August, 2009. “Some companies do escape the deadpool,” says Jacob.

Today, Coveroo offers more than 3,000 designs for all kinds of mobile phones from Androids, Blackberries and iPhone (cases) to Nokias, Motorolas, and Samsungs. You can etch your favorite band, sports team, TV show, movie, or character on the back of your phone, or submit your own design.

“We are seeing a real boost in sales of custom phone covers around phones that are quickly and widely distributed. People don’t like to have the same phone as everyone else even if it is the new iPhone 4,” notes Jacob.

The company also etches phones at live events such as concerts and movie premiers. (We’ve had them at some TechCrunch events, they are always a crowd-pleaser). It is also in trials with a Coveroo kiosk that could be placed at electronics retailers.