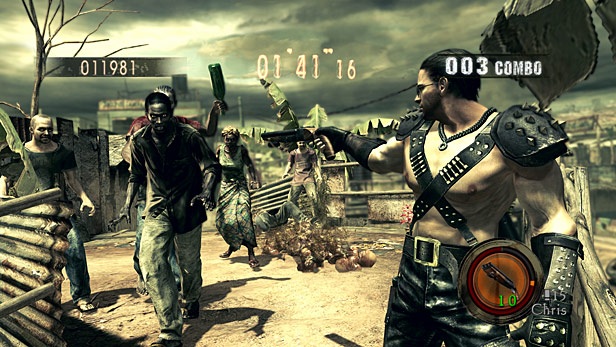 The lesson is, the gun is good.

God bless them for trying. Sony Japan will release two PlayStation Move bundles to hopefully kick-start the motion controller era. Oh, wait: the motion control era started nearly four years ago with the Nintendo Wii, and now it’s in danger of losing the casual audience to things like Farmville and Farmville-ville. That’s the game where you play the role of someone who’s playing Farmville. You’ve got the PlayStation Move Bio Hazard 5 (Resident Evil 5) Alternative Edition Special Pack and the PlayStation Move BIG 3 GUN SHOOTING Perfect Pack. Perfect Pack, ladies and gentlemen. Curt Henning would have approved of that one.

The Bio Hazard pack (around $91) includes the Gold Edition of the game, plus a Move controller. What could me more exciting than bumbling and fumbling your way through Africa with the Move controller?

Remember that episode of The Simpsons when Lisa rigged a cupcake with electrodes, and then Bart kept trying the cupcake despite the shocks? And the mouse learned his lesson right after the first shock? That’s like me with motion controllers, all of them: I know it’s not for me, so why keep trying?