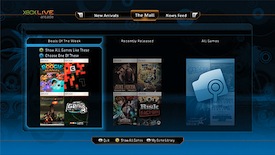 Get ready for Xbox Live Arcade to become a bit more useful. Microsoft’s Major Nelson announced today that there is a significant update to Xbox Live Arcade, including a new recommendation engine and visual browser system.

Major Nelson indicated that the update, due to launch next week, will also allow you to see what games your friends like, which games are the highest rated overall, and what games are similar to the ones that you enjoy. There’s also some visual changes, but the real story is the new usability features. Major Nelson posted some screen shots to his Flickr account, and it looks pretty good.