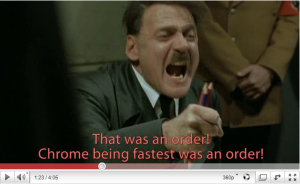 When Opera Software last week released the final version of its Opera browser (version 10.60), it titled its press release ‘What is faster than the fastest?’.

The company touts other features, like built-in geolocation and webM support, as well but not nearly as much as it boasts about its browser’s speed. By doing so, the software maker aims to challenge claims that Google’s Chrome browser is, in fact, speedier than Opera and other popular browsers such as Firefox, Safari and IE.

In the midst of the browser wars, an Opera-employed copywriter has now turned to one of the most over-used but still amusing Internet memes, and has come up with some custom subtitles for the famous Hitler outburst scene from the film ‘Der Untergang’ (via Download Squad).

“You idiot! Nobody uses developer builds!”

“You call yourself developers because you spent years in university, where you only learned to make Youtube (sic) videos and Pac Man (sic) games!”

“We have 20,000 employees and run half the Internet and we’ve made a browser that looks like a Fisher-Price toy!”

For the record, Lifehacker ran some speed tests on both the Windows and Mac platforms, and concluded that Chrome and Safari still beat Opera’s latest on the latter OS, while the latest stable version of Chrome also beat Opera 10.60 on Windows.

Furthermore, DailyTech tested Opera 10.6 against the upcoming Internet Explorer 9, and while they concluded that the browser outranked it in all 3 benchmarks, the Opera browser only came out on top in one of them, with Chrome beating them in the two other ones.

Ah well, as long as they all keep getting faster and we get to have some laughs from time to time, all is well in the world despite all this virtual warfare.