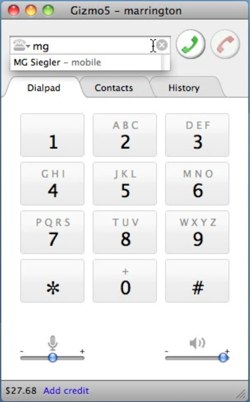 As soon as everyone got to actually see the unreleased Google Desktop application in action, they wanted to have it.

The only problem is this isn’t just about waiting until Google finishes it off and ships it. There’s a real possibility that Google will never release a Skype-like soft phone for the desktop – they clearly want to build these types of applications in the browser. But the experts we’ve spoken with, including Skype execs, say browser technology just isn’t ready to run high quality VoIP calls at scale. Even with advancements in HTML5, it’s still at least a year away, say people who know:

And sometime after that, we will see web applications leveraging Skype as a service, too.

A couple of things have to happen first, though. There are two reasons Skype has to run on a client today. The first is audio/video encoding at the client level that ensure high quality calls with low latency and minimal configuration. There’s a reason calls on Skype tend to sound good. The second is the p2p architecture of Skype, which also affects latency and cost.

It’s relatively straightforward for Skype to allow third parties to build both functions into their apps via a SDK, which is why we’ll see desktop applications integrate Skype as a service first.

But the real win is when you can initiate skype voice and video calls via web applications. It’s not clear that we’re anywhere near that being possible with today’s browsers, say experts we’ve spoken with. There will likely always need to be some desktop software to assist with at least audio/video encoding. But it’s possible this could be done via browser plugins, or even in Flash.

So when we see Google Voice exec Vincent Paquet say that their product effort is focused on a browser version feels like decisions are being made based more on internal Google politics than reality:

We designed Google Voice to be endpoint-agnostic and we certainly want it to be accessible from any type of endpoint, not just phones,” Paquet told eWEEK June 21. “The direction in which we are going to keep working is to use the Web, which is probably the best UI there is in the world, to give you more control and personalization over your communications.

Google could of course just build Google Voice directly into Chrome. In January we wrote about a Google Voice Chrome extension that lets users do just about everything except make or receive a call through their computer. It wouldn’t be hard for them to add in the soft phone code as well, particularly since we’ve seen it demo’d so well already.

In the meantime, though, and for everyone that may not want to switch to Chrome, we think a Google Voice Desktop application makes a lot of sense. For Google. And for Google’s users.

So we wholeheartedly endorse this petition which popped up two days ago to show support for a Google Voice Desktop application. I’ve signed it, and I command you to sign it too. Right now. And then get all your friends to sign it. Because as much fun as it is for me to have an illicit copy running happily on my computer, I want to share the love. And sadly my lawyers seem quite insistent that I don’t distribute it broadly on the Internet.