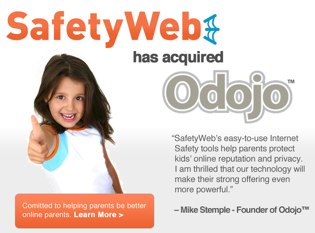 SafetyWeb, a service that lets parents monitor their children’s online social activities, has made its first acquisition – Colorado based Odojo. The companies are not disclosing the terms of the deal other than that it is an all cash transaction.

In June SafetyWeb announced a $8 million funding round from Battery Ventures with First Round Capital, and the company has raised a total of $8.75 million.

This appears to be a technology acquisition, and only one Odojo employee, an engineer, will be joining SafetyWeb. Founder Mike Stemple will join SafetyWeb as an advisor. Odojo’s technology will help SafetyWeb identify specific dangers by category, such as “drugs,” “sex,” “suicide,” “anorexia,” “hate,” etc.

This is a space we’ve begun to cover more deeply. Parent anxiety over exactly what their kids are up to online means there’s lot of potential cash for anyone that gives them at least a basic level of monitoring. Last week we covered SocialShield, a less well funded competitor. And the New York TImes also took a look at the space yesterday. Expect intense competition over parents willing to pay a few dollars a month for some peace of mind.