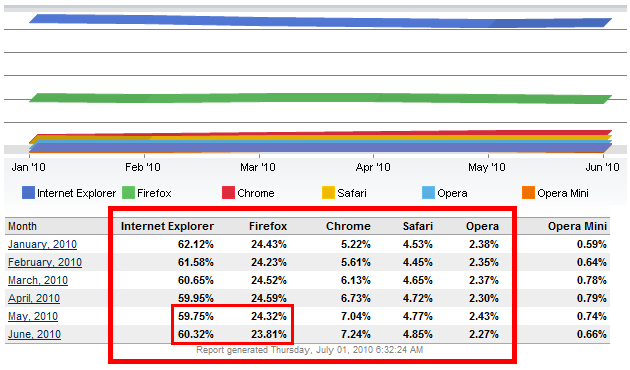 Microsoft’s Internet Explorer is showing early signs of a ‘comeback’, reversing a practically constant slide in browser usage over the past few years for the month of June, according to figures just released by Net Applications.

Still the dominant browser in terms of market share any way you slice it, Internet Explorer appears to be reclaiming share at the expense of Mozilla Firefox, specifically, with Google Chrome and Safari also showing decent growth for the first part of the year.

According to Net Applications, IE had already reversed its trend in the U.S., gaining usage share. In June, the trend reversal has apparently become global.

Mozilla’s Firefox, meanwhile, dropped in usage from 24.3 percent to 23.8 percent, while Chrome saw modest growth climbing from 7.0 percent to 7.2 percent from May to June 2010. Usage of number four, Apple’s Safari, increased from 4.8 percent to 4.9 percent, while that of Opera’s browser slipped from 2.4 percent to 2.3 percent. The latter browser just got a significant update with the release of Opera 10.60.

Net Applications attributes the increase in usage to Microsoft’s ‘Confidence’ campaign, but other factors may be involved as well, like the success of Windows 7 and the browser choice screen that now turns up with new Windows installations in Europe (I think a lot of people choose to install IE8 out of familiarity with the browser’s name and logo).

Microsoft was quick to gloat over the increase in usage in a blog post by Ryan Gavin, Senior Director, Internet Explorer Business and Marketing. Gavin points out that Internet Explorer 8 grew faster than Google Chrome last month, calling the trend ‘encouraging news’.

He’s cautious enough to say that he and his team don’t judge business on just two months of data, but goes on to write that the future is looking bright for Internet Explorer. Indeed, the previews we’ve been shown of Internet Explorer 9, the next version of the browser, seem very promising.

Who said IE was dead?