Mixpanel, an analytics-focused startup whose backers include Y Combinator, Michael Birch, and Max Levchin, has hit a big milestone: it’s now processing over 1 billion actions per month. To put that in perspective, a year ago the company had recorded 80 million actions cumulatively.

Mixpanel was built by former Slide employees, who took their experience with that company’s extensive analytics tracking and built tools that other developers can integrate into their own applications. These datapoints can include pretty much anything a developer wants to track, from the number of pages a user has viewed to how many virtual cows they’ve thrown in a Facebook app. Cofounder Suhail Doshi says that the volume of data the site tracks grew 185% last month alone (you can see the growth chart below).

Earlier this week, Mixpanel launched a new feature for its funnel tracking system, which allows developers to identify exactly where in their applications users are engaged, and where they’re leaving. Before now in order to take advantage of Mixpanel’s funnel tracking developers would have to write code themselves — the new system offers a control panel interface that lets even less technical users implement funnel tracking. The service will also soon be releasing a native Flash library that will appeal to the many Flash game developers who want to integrate analytics.

One of Mixpanel’s competitors is Kontagent, which just raised another $4.5 million. Kontagent is reportedly tracking around 60 million daily active users across all of its customers’ applications — Doshi says that Mixpanel is tracking significantly more than that, in part because Kontagent is focused exclusively on tracking Facebook applications, whereas Mixpanel is used more broadly (for example, Justin.tv uses it for their analytics). 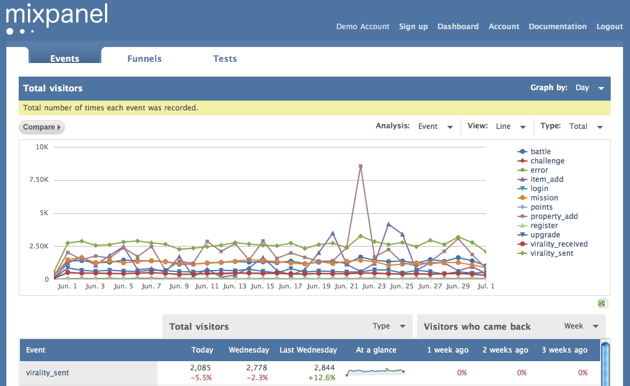