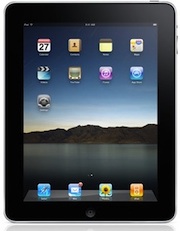 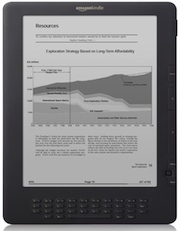 Amazon continues its revamping of the Kindle line. Fresh off of big price cuts for the traditional model, a roll-out of picture/video software for Apple devices, new social media features, and a new Android app, Amazon today announced a new version of its larger model of the Kindle: the DX. The key differences? It’s cheaper, sharper, and available in black (or as they call it, graphite).

The Kindle DX is particularly interesting because of its 9.7 inch screen — the exact same size as the screen on the iPad. And now, with the new black trim around the screen, the Kindle DX looks more like an iPad. Of course, the key difference is that the iPad’s screen is both in full color, and it’s a touchscreen — the Kindle DX still has neither of those features. What it does have, is a more attractive price: it’s now $379.

The price cut is also interesting. Previously, the Kindle DX was $489, which is only $10 cheaper than the cheapest version of the iPad. Undoubtedly, that was a very hard sell for Amazon to make. It’s still going to be a hard sell, but Amazon is pushing hard for the reading crowd with 50 percent better contrast and darker fonts on its e-ink screen.

Not surprisingly, Amazon is also playing up the Kindle’s access to a huge digital library — one larger than the one the iPad has access to. Amazon says that over 200,000 titles have been added to the store in just the past six month (in other words, since the iPad was announced). And they now have over 620,000 books in the store to buy — on top of 1.8 million free, out-of-print books.

It’s still not clear why anyone would get a Kindle DX when they can get the iPad for a little bit more — or a regular Kindle for much less. But it’s clear that Amazon it willing to try different things to see what, if anything works.

The Kindle DX is available for pre-order now. It ships July 7.