The reviews are coming in for The Last Airbender, and wow are they bad. This is looking like a good candidate for worst-reviewed movie of the year. How could it fail so incredibly hard? I’ve made no secret of my optimism regarding 3D content, but I’ll be the first to admit that 3D is not always good for a film — and if done poorly can ruin it. It sounds like The Last Airbender was ruined before they even started shooting it, but here are a few tips for Mr. Shyamalan’s next 3D feature.

As far as I’m concerned, any producer greenlighting a 3D conversion should be fired. It’s expensive, labor-intensive, and more importantly ineffective. Even at its best, converting a 2D movie to 3D is a shadow of true 3D. At its worst, it can be more painful to watch, or simply unconvincing. Conversions are the most transparent rain dance a producer can do in order to spice up a feature. I could tell from the preview before Toy Story 3 that this was a conversion because I spotted errors baked right in — the way you can tell something has been shot on a green screen.

Just so we’re really goddamn clear on this.

One of the problems 3D has yet to master is brightness. Most 3D technologies end up reducing the amount of light reaching each eye by half, and if your movie is a dark one, it’s going to get a lot darker. Toy Story 3 and much of Avatar were bright and colorful; even the night scenes in Avatar were enlivened by luminescent flora.

4. Don’t be careless with CG/human interaction

When you add depth information, the audience is harder to trick. In a regular film, you can get away with a lot because there are ways of creating foreshortening, manipulating distance, and so on. It’s much more difficult to create these space effects in 3D because the mind wants it to look real. Be especially careful in a 2D/3D movie, where the 3D elements have smooth and generative 3D paths, but characters and backgrounds have their depth painted on.

5. Don’t overdo the depth of field 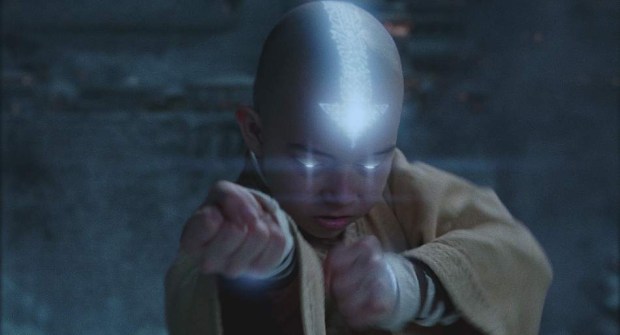 When you can’t add real depth, photographic techniques like background blur are useful for isolating image elements. Unfortunately, background blur doesn’t transfer well to 3D, technically or psychologically. The savvy 3D films are eschewing depth of field for adding lots of interesting and real depth cues in the background. Floating islands, small things moving around, giving your brain the information it wants about what’s back there. Your eyes don’t like blur in 3D because think about it, if it’s out of focus in real life, you’re usually not looking at it.

This lamentable habit of action films has its roots, like more respectable techniques, in the inability to actually make things fly out of the screen. Now that we can do that, there’s no need to put it right in people’s faces. Carefully choose your camera angles and depth levels so that you can “threaten” the audience without resorting to cheap tricks.

Reportedly, the bad 3D effects are the least of The Last Airbender’s worries, but I don’t have time to write any tips on “How not to make a terrible movie.” These will have to suffice for now.