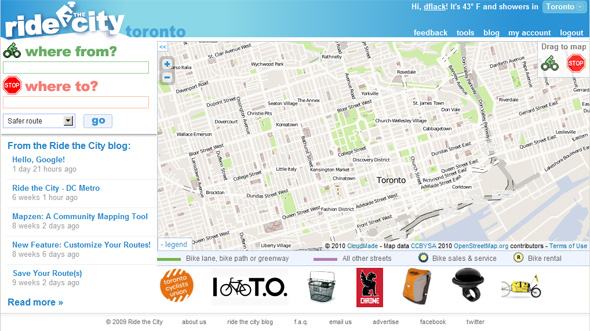 Let’s be honest; riding a bicycle is a great way to save money and the environment, but it can be dangerous at times. In some cities, it can be downright deadly. So what can you do to protect yourself? You could become a militant bicycle rider that hunts down bad drivers, or you could learn the safest route. The good news is there’s an app for learning the safe way to go.

The app is called Ride the City and it’s connected to a free website with information on Austin, Louisville, New York City, San Diego, San Fransisco, Seattle, Toronto, and the Washington DC metro area. The best part about the app is that whenever the developers add a city, you get that city added to your app for free! Currently the app sells for $2.99, and updates automatically.

What’s the point behind the app? Well, Ride the City helps you find the safest and most efficient way to get to your destination. The app will help you to find the best bicycle lanes, trails, paths, and greenways to get you where you want to go. Not a bad deal for $2.99 eh?