Mobile applications discovery and sharing service provider Appsfire has just launched a new product called AppTrends, which essentially delivers near real-time rankings of iPhone apps based on the chatter on Twitter.

Rankings – currently limited to the top 20 apps on the website – are based on what Appsfire determines are noteworthy items in the App Store virtually in real-time. Appsfire crawls Twitter for links to iPhone apps, regardless of whether the iTunes URLs are shortened or not, and determines which apps are hot and which are not based on their popularity on the micro-sharing service.

To do so, Appsfire looks at the number of mentions of applications, all while filtering out bots, repeat tweets from the same users, updates from seemingly fake accounts and activity tweets such as leaderboard or points sharing. In addition, the startup looks at the influence of users talking about certain iPhone apps (based on Klout) to keep its rankings as relevant, clean and trustworthy as possible.

The company tells us it’s capable of also determining sentiment through automated analysis, but intentionally does not use that data for the rankings because it claims the large majority of tweets about apps are positive of tone, according to one month’s worth of research.

AppTrends gets updated on an hourly basis, and you can view evolution for the apps in the top list for the past hour, 12 hours or full day. 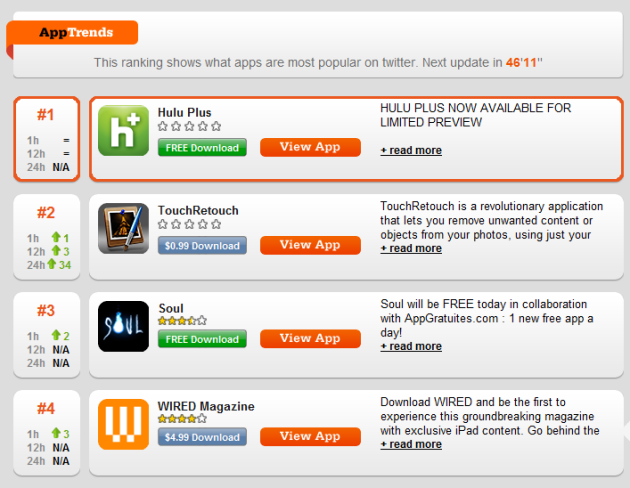 All in all, for power users this could be very useful, given how the rankings coming from Apple are relatively similar from day to day – with AppTrends users can spot up and coming apps more rapidly and this stay ahead of the curve when it comes to downloading and testing new apps. For non-power users, the added value is less clear.

If you’re an app developer or publisher, you can also use the service to track what’s being said on Twitter about your app – provided you made the top 20 list – in real-time via a sidebar.

Appsfire intends to go from a top 20 to a top 100 list in the near future, and also offer localized rankings per country/store. Also in the works: lists per vertical, access to rankings from the past and notification services for developers.

Coinciding with the launch of the new service, Appsfire has announced that a new investor joined the group of angels backing the company and brought an extension to its seed funding round. The new investor’s name is Lerer Ventures, the New York-based investment firm that has backed startups like (Twitter shareholder) Betaworks, GDGT and just recently, Seeing Interactive.

The icing on the cake: Appsfire has persuaded Jyri Engeström (formerly at Google after selling his startup Jaiku to the Internet giant) to join its board of advisors.