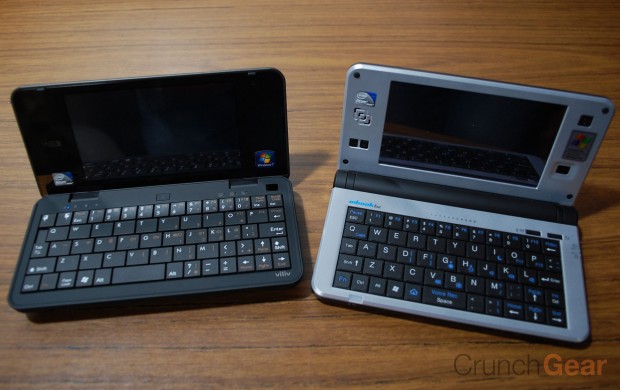 I have before me the two hottest clamshell PCs on the market: the Viliv N5 and the UMID mbook BZ. I’m not sure if hot is the right word seeing as I’m still not convinced there’s even a market for these devices, but let’s move on.

The two are very similar. They both share the same form factor, target demographic, and functions and so what follows is my quest to determine the best device. However, I’m not sure I succeeded. 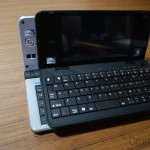 There is no question that the Viliv takes top honors in this category. The N5 is sleek, sexy, and downright gorgeous where the mbook BZ is, well, utilitarian.

It’s just not looks, though. The Viliv N5 feels so much more solid. The construction quality is top-notch with not one manufacturing seam out of place. The mbook BZ material’s feel cheap in comparison.

Both the Viliv N5 and mbook BZ have 1024 x 600 screens. Both screens have great contrast, brightness and sharpness. However, the glossy overlay on the N5’s makes it a mirror in a bright room or outside therefore the mbook BZ wins by default. 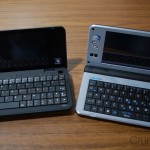 Typing on these small clamshells is almost an art form. I’m still not sure if I’m supposed to place the device on the desk and type with my fingers, or grip it like a BlackBerry and peck with my thumbs. Neither are great at the task, but I’ve found the keyboard on the mbook BZ to be a bit more usable.

At first look, the mbook BZ’s keyboard is a bit mushy, but it’s not like you’re pounding on it desktop-style so it really doesn’t matter. The mbook bz’s letter keys are all the same size and in the right location where a few of the letters on the Viliv’s keyboard are slightly smaller — the L and the K, specifically.

The narrower build on the mbook BZ also makes holding it BlackBerry-style easier and therefore better suited for thumb typing.

However, the optical trackpad on the Viliv N5 works so much better than the mbook BZ’s. It’s nearly unusable on the mbook BZ, although it could be a driver issue. Thankfully both are touchscreens, though, so it’s not like you’re required to use the pads anyway. 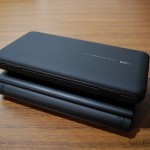 The mbook BZ is listed with a 7-hour battery and the Viliv N5’s is supposed to last 6. Both last about 5:30 in my tests.

The Viliv is a slightly more powerful kit with an Intel Atom Z520 1.3GHz chip and 1GB of DDR2 memory vs the mbook BZ’s Intel Atom Z515 1.2GHz paired with 512MB of DDR2 memory. It shows, too. YouTube runs fine on both, but the Viliv N5 can just barely playback Hulu Desktop and a 720p video file.

Of course this comparison is a bit silly seeing as the Viliv N5 will cost more than the mbook BZ when it launches later this summer. But still, I believe UMID mbook BZ held its own in most of the tests and might fit your requirement list for a full-feature pocketable clamshell PC. Really the only that the Viliv N5 does better is video playback. It doesn’t hurt that it looks better, too.