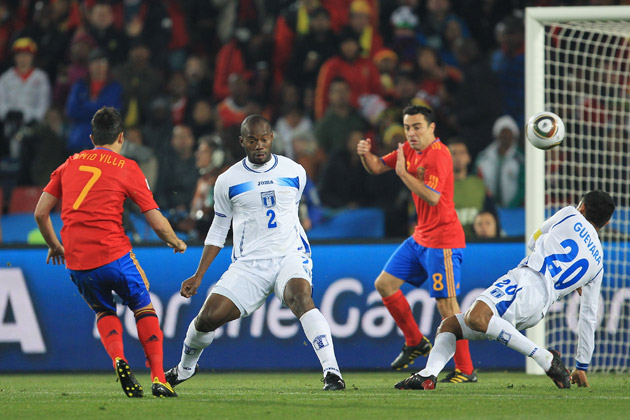 Villa seems comfortable on the ball…

Sitting here watching Uruguay’s Luís Suárez bury the ball (his second goal = !!!) into the back of the net, I’m thinking to myself: “Boy, he sure didn’t seem to have any problem controlling the Jabulani.” But never mind, for FIFA, world soccer’s generally inept governing body—remember, this is the same body that refuses to allow goal line technology!—has finally come out and said it: “FIFA is not unreceptive about what has been said about the ball.” The organization now plans to talk to players, team officials, and the ball’s manufacturer, Adidas, after the tournament. The question is: is the ball crocked?

The funny thing is, if there’s anyone “to blame” about the Jabulani, it’s FIFA itself! Adidas can’t sit in its laboratories and create a ball out of think air. FIFA sets standards and regulations and the various manufacturers meet these standards. The Jabulani meets FIFA regulations, so to blame Adidas for the ball would be like blaming a French Press from making too delicious coffee: that’s what it’s designed to do!

And it’s not like the Jabulani is new, having been used in Germany’s Bundesliga since last December. (There’s even been a Pro Evolution Soccer Bundesliga Jabulani patch since March!) Granted, I don’t read Kicker every day, but I don’t recall any big controversy coming out of Germany because of the ball.

I don’t want it to sound like I’m defending Adidas—I patently don’t care one way or the other. It’s not like I’m a stock holder or anything. If the ball is crocked it’s crocked, so be it. I merely think that complaining about the ball is a time-honored tradition. And if the Jabulani has been in use since December, then the onus is on FIFA to explain why it allowed the “flawed” ball in the World Cup in the first place.

Perhaps there’s a failure somewhere in this mess, but I’m not exactly sure blame lies with the Jabulani itself.