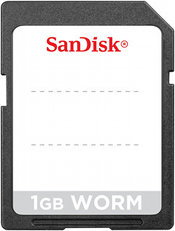 Sandisk has created a new line of write once, read many SD cards, mainly intended for law enforcement. I suppose you could use one for taking pictures of grandma, but I don’t really see the point for personal use. Well, maybe for weddings and graduations and such, but part of the attraction of digital cameras is that you can erase pictures without worrying about it.

In addition to the cards being only able to be written to once, they’re intended to last for 100 years. Now, I’ve taken some pretty good pictures (going to Yosemite this weekend in fact) but I don’t know for certain that I’d have any desire to keep any of my pictures that long. Sandisk suggests using them for evidence collection and so on — as long as they’re adequately protected, a write-once, tamper-proof card could be an important tool in court.

The new cards aren’t yet available for purchase, but no doubt Sandisk will have them available at some point in the near future.