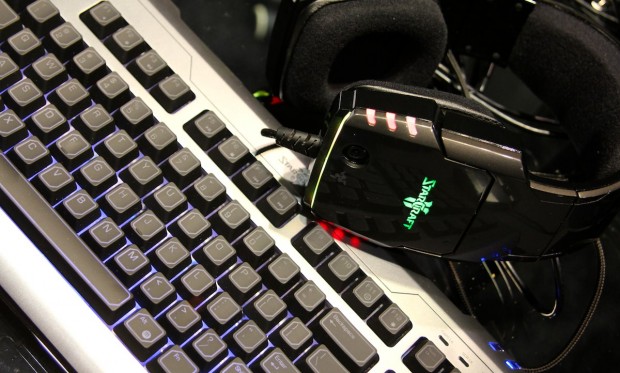 For the last six months or so, whenever I was on Razer’s site for whatever reason, I always would check the StarCraft II section for updates. There were silhouettes there for ages, teasing Blizzard-branded peripherals, yet aside from the messenger bag we gave away, we saw no more of said peripherals than we saw of the dark side of the moon. But E3 this year was the launch date, and I spent a little time yesterday talking about the devices with the head of Razer, Robert Krakoff.

So there are three new peripherals: a keyboard, a mouse, and a headset. All three were joint projects between Razer and Blizzard, and it shows — for good and for ill. Let’s take a look at the gear.

The idea here was to provide a compact but robust RTS-oriented mouse. They found that most pro RTS players use a claw grip, so an ergonomic shape was less necessary than one that’s comfortable to grip from both sides. So it looks a bit weird: it’s bigger toward the button end, making a sort of wedge pointing at you. There is the usual button selection: two main buttons, two side buttons, a scroll wheel and wheel button. They all felt snappy to me, no surprise there. The tracking engine is even more advanced than their previous line of mice — it’s now a 32-bit interface. While I doubt anyone was running up against the limitations of a 16-bit interface, there were times where there was simply too much data to process and the result is skipping. At any rate, higher is better.

I was going to make fun of the lighting on the mouse, since Robert told me some time ago that they’re trying to move away from flashy lighting, but it turns out that it’s functional. On the mouse, keyboard, and headset all, there are customizable LEDs, but they’re not just for looks. They worked really closely with Blizzard to build up a set of in-game events and actions that can be set to turn on different colors of LEDs. So if your base is under attack, flash red. If a unit is born, green. You can also set it to record your APM (actions per minute, a critical metric in pro RTS gaming) and change color based on how fast you’re working. Pretty awesome if you ask me, though at $80 it’s pretty expensive. 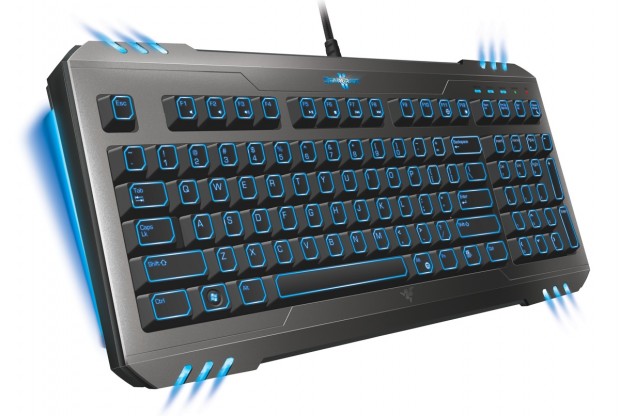 Robert tells me that the big StarCraft II pros tend to use a certain model of keyboard — a long-throw membrane one of all the ones to choose from. It’s just what they like. So… they put out the Marauder based on that design. Personally, I didn’t like it at all. The key depression action felt gummy, and the lack of dedicated media keys will turn off a lot of people. The drivers support enormous macros, and you can pretty much set a macro for any key by using the macro modifier button, so if you’re a macro fiend that might be handy (not me, though). And no USB slots or mic/audio ports? For $120 it really needs to do a lot more than this, I’m afraid. It does sport the lighting system, which is nice. 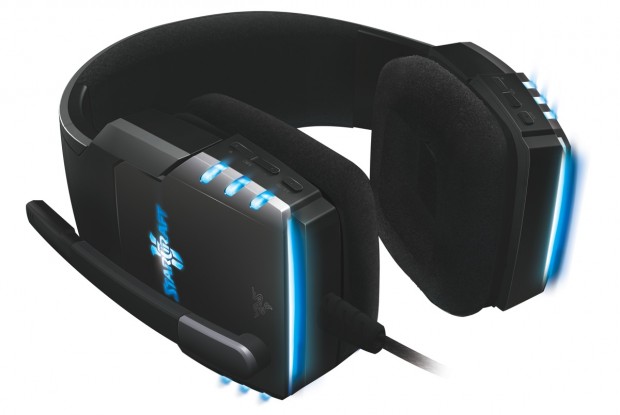 I liked these, though I can’t say exactly why. A certain je ne sais quois, I guess. There are controls for volume and mute on the back of the earcups, with the right controlling audio and the left controlling microphone. The placement seemed nice; I’m always hitting the Logitech G35’s media buttons by accident, and on Razer’s Megalodon set it’s a pain to have to take yourself out of the game to fiddle with the little hub. They look heavy but they’re not particularly so, and the weight is distributed nicely. The final design will have slightly larger earcups… the better envelop you, my dear.

The microphone is removable, which just means I’ll lose it. It also flips up, though I’m not sure if I prefer that over the retractable style of the Nox and SteelSeries headsets.

At $120, I think it’s a bit much for a stereo headset — maybe if it were surround sound…
There you have it. My judgment is: nice gear, but a bit dear. The SC2 branding allows them to charge a bit extra, and there will almost certainly be bundles where you can save a bit on all three plus the game, but they’re coming in with a high price to an already-competitive market. The lighting system might give you the edge in a game, though, so if I were playing competitively I might pick up the mouse just for that.