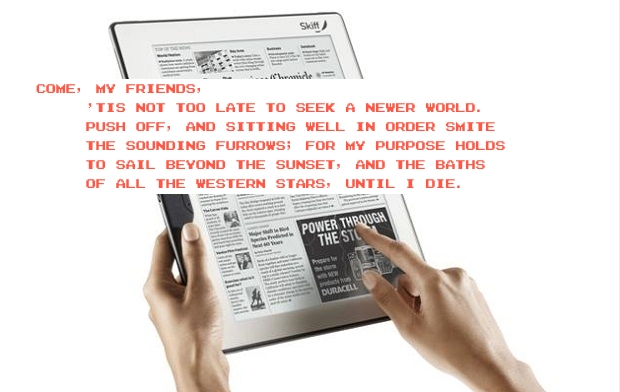 Not to say I told you so, but I told you so. The Skiff newsreader that made waves at last CES is dead, abandoned by News Corp. who bought the e-reader software but not the device from Hearst. The software will probably be used in News Corp’s “Next Issue Media” endeavor that was supposed to be Hulu for magazines.

In the end, the Skiff was too strange to survive. Outsized, ugly and backed by Hearst and Sprint it was a project doomed to failure, designed more as a proof-of-concept than an actual project.

Listen: the US belongs to iPad and Kindle and the rest of the world will be scrambling to hit third place with their unique ebook readers straight out of Asia. If you’re a big old pirate, any ereader will do but if you’re a magazine fan you’ll probably just get an iPad and suffer through whatever magazine app of the moment appears in the App Store.

Publishers need to think in terms of a podcast store for magazines instead of Hulu for magazines. You pay $15 and get a subscription. You get a memo when a new issues appears. You read it. You get on with your life. Anything else is far too much for a vast majority of users.