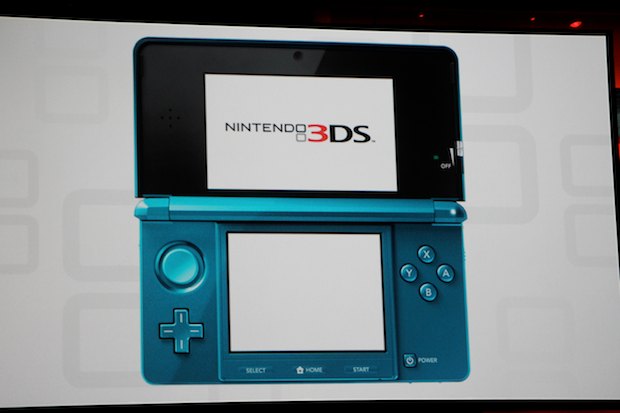 Can’t say we didn’t see this one coming. Well, Nintendo themselves announced that there was a 3D version of the DS in development a few months back. But it’s finally official with a E3 2010 debut and it’s just about what everyone imagined.

The secret of the 3DS is the 3.5″ glassless LCD panel that can toggle the 3D on and off. This puts the option in the hands of the gamer and allows previous titles to work just fine with the new hardware, although only the bottom 3″ screen is a touch panel. A motion sensor and gyrosensor are included, which should spur new game capabilities and functions. An analog stick is a must with a 3D gaming and so the 3DS will be the first Nintendo portable with the input device.

The 3DS has three cameras: One on the inside for video chatting and two on the outside, which work in stereo for 3D photos.

The 3DS’s glassless screen can even playback 3D movie content and Nintendo has partnerships with Disney, Warner Brothers, and Dreamworks. No word on specific movie titles just yet.

Nintendo has lined up 21 major gaming studios to support the 3DS. These partnerships will bring everything from Rock Band, to Metal Gear Solid, to countless other hit titles to the portable gaming device. If there’s one thing that clear, gaming houses are fully supporting this platform, which pretty much guarantees its success.

The launch lineup will be pretty huge, though many are retreads or re-releases; here are some of the standout titles that will be available (titles not final):

No word on pricing or availability, though. It’s probably a safe bet that it will be out before the holiday season. Or maybe not. More as we get it.