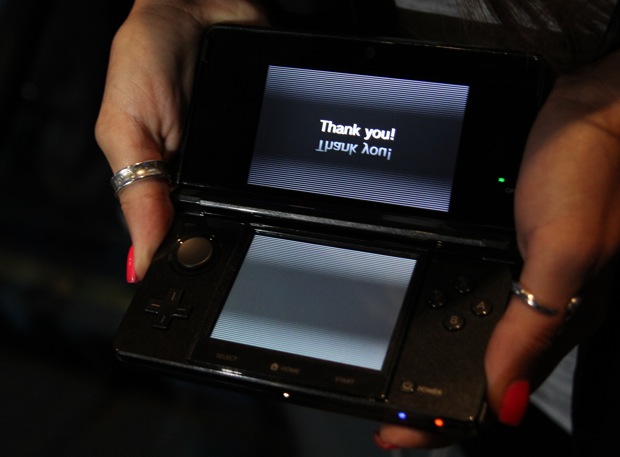 There’s not a lot to say about Nintendo’s new handheld, unfortunately: our demos are limited to one minute, the lighting is bad, and of course the 3D effect doesn’t translate to pictures or video. But here’s how it felt to me…

The 3D effect doesn’t feel to me to be one of things popping out of the screen, but of depth behind the screen. Things certainly seemed to protrude a bit depending on how you looked and what the scene was, but by and large it felt like the 3D screen was a sort of window into a room, inside which everything was 3D. The 3D effect certainly is real, though.

Various scenes of Mario and friends were running and you could change the angle of the camera, but there was no actual gameplay. Moving my head a few inches either way resulted in ghosting and eventually doubling of the image; the sweet spot is… I don’t want to say forgiving, but you won’t need a neck brace to stay in it. The normal movements of your head won’t bother it.

The device itself is glossy, the unit I had was black, and it felt much the same as a DS. The slide pad felt smooth and the analog response was great. Unfortunately that’s about as much as can be said right now, so I’ll leave it at that until we get a more thorough hands-on with video and all, later today on the show floor.