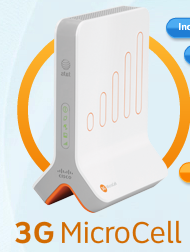 AT&T has had a rough day. First there was the massive system failure during the iPhone 4 pre-orders. Then it was revealed that private customer data may have been exposed during the fiasco. So maybe we should give them a break, right? Nah.

As you may have heard, TechCrunch recently moved into a new office. It’s a great spot in San Francisco; we love it. That said, it happens to reside on planet Earth which basically assures that we’ll have no reliable AT&T coverage. Sure enough, we don’t. I mean absolutely none — can’t place calls, don’t receive them. As an old pro in the SoMa area of San Francisco, I’m used to this. But some of my coworkers aren’t and would prefer to use their phones as actual phones from time to time. So we needed a solution.

That solution, everyone has been telling us, is the AT&T 3G MicroCell (basically a mini cell tower that you put inside your office). I was against getting one because I’m still absolutely enraged that AT&T expects its customers with shitty service to pay for this thing — and $150, no less! We pay AT&T $100 (or more) a month for their service that doesn’t work and they want to charge us more to fix it. Brilliant.

But whatever, I’m a team player. I’ll suck it up and swallow my pride so my coworkers can make calls. So we tried to buy one today. Guess what? AT&T won’t sell it to us.

That’s right, not only does AT&T service not work in our office, but they won’t sell us their proposed solution. Why? Apparently it needs to be attached to an AT&T phone with a billing address that matches our office address. I would assume this has something to do with AT&T wanting to know where you’re using this thing (it also has GPS that you must activate) — because heaven forbid we bestow actual AT&T coverage to somewhere besides our office. It may also have something to do with emergency 911 rules — but that’s not what they told us, and I can’t find that anywhere on the site.

AT&T: Will you please give us your damn rip-off fix-it box? Sorry, did I say “give us”? Silly me. I meant: Will you please sell us your damn rip-off fix-it box? We promise not to take the thing on a cross-country tour giving actual AT&T coverage to those already paying for it. We just want to make some damn calls. In our office. It’s actually kind of important for what we do.