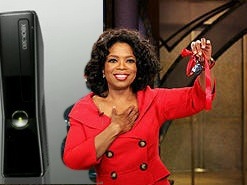 Although there was plenty of news coming out of Microsoft today, the most interesting move is their decision to begin shipping the brand new Xbox – it’s basically the old Xbox with 802.11n Wi-Fi, a 250GB hard drive, and Kinect support – the same week they announced it. It’s not quite same day, but it’s close.

However, another treat came when they announced all the media at their press event will be getting Xbox 360s immediately and that they would be showing up at their domiciles and places of business posthaste. Ethical issues aside, this is an interesting marketing effort.

These sort of giveaways are common at developer events (well, actually just Google IO) and I suspect they’ll become more popular in the coming months. Gear is so cheap to build and ship that it almost makes sense to blanket the evangelists with it. Whereas the old model of “selective releases” works for some products – Apple, in particular excels at this – the Xbox team is dealing with an entrenched base of hardware users who will be loathe to swap out their old Xbox, provided they’re not RRODed.

By blanketing the media, they’re ensured that a mass of gamers will think of the new model as the new hotness while imagining the old version as, in contrast, old and busted.

As a corollary to this, I suspect you’ll find some great deals on used Xboxen on eBay very soon.