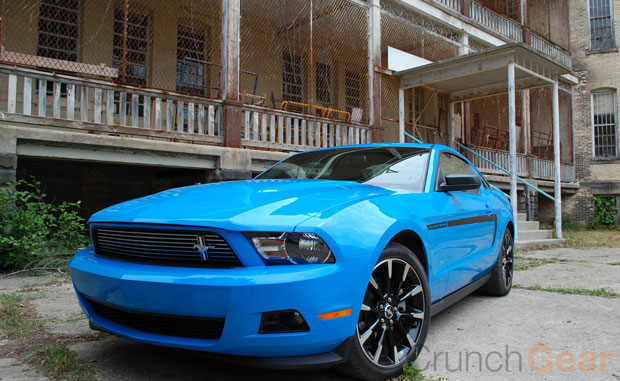 Let’s not call this article a review. I’m not going to drone on about interior creature comforts or available options. I’ll just state up front that they are on par for a $22k+ car and besides, other outlets have covered those items extensively.

No, what follows is a description of what the 2011 V6 Mustang feels like to drive. This car is something special. It’s a rare amalgam of real power, affordable price and driving excitement that hits you hard and makes you beg for more. 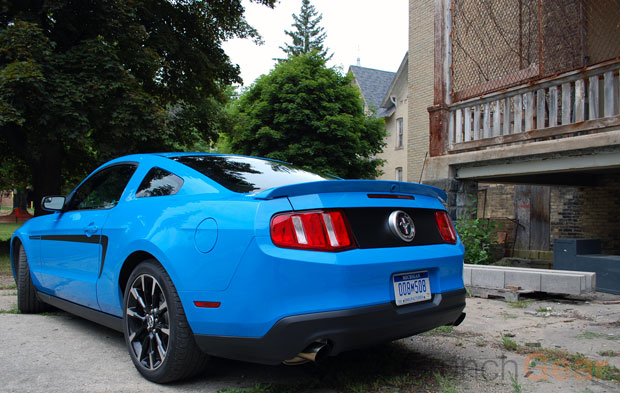 Before I lay out my heart for this car, let’s set the scene. The Mustang I drove for a few days is the Mustang Club of America edition – a mostly appearance package for the V6 model that adds a billet grill, fogs, side stripe, rear decklid spoiler and 18-inch stainless painted aluminum wheels wrapped in Pirelli P Zero rubber. The engine is the base-level all-new aluminum block 3.7L V6 that outs 305HP and 280 lb.-ft. of torque and 31MPG capable while cruising on the highway. My tester was fitted with the smile-inducing six-speed manual transmission. Simply put, this car wants you to have fun.

The interior (I know, I said I wasn’t going to do this. Hang in there.) is as retrotastic as the exterior sheet metal. A warm leather-wrapped three-spoke wheel draws you in and keeps you firmly grounded while the stick begs you to take advantage of it. The dual-gauge cluster with tall and monolithic numbering helps complete the time warp. 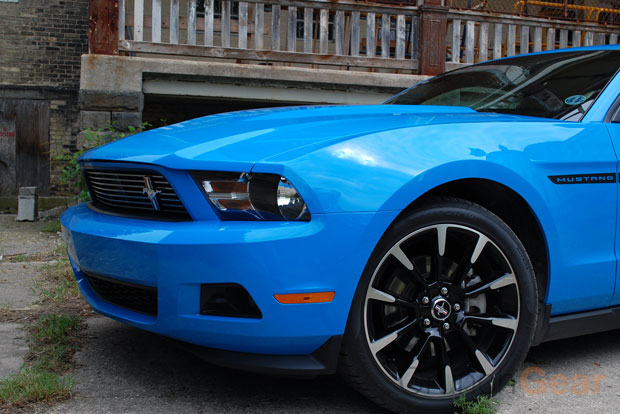 Truth be told, the interior and exterior are simply an evolution of the previous design. Nothing is radically different — that’s a good thing — but softer lines replace the almost-trying-too-hard design found in the 2005-2009 models. It’s almost as if Ford simply stopped using mid-’60s Mustangs as design inspiration, and moved on to the 1967-1970 models.

That’s just fine. This series, thanks to the awesome new engine and transmission options, finally completes what Ford has been attempting since the 2005 throwback design was announced: a true-to-the original everyman’s sports car.

There was a time when American muscle rumbled through the streets of suburbia every Friday and Saturday night. A time when factory workers could afford the sports cars they were building. A time when an enterprising high schooler could work hard for a couple of summers and actually afford a car nearly as good as his dad’s. That’s what this new Mustang offers. 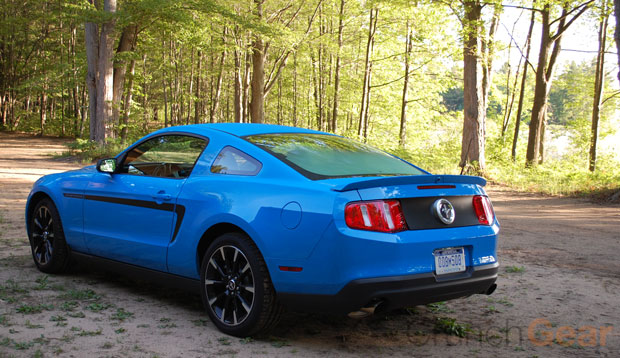 The 305HP V6 mated to its optional six-speed transmission is more than capable of breaking the tires loose when thrown even into third. It has plenty of power to slam its occupants into the leather seats. The standard dual exhaust produces such a throaty rumble that unknowing gas station onlookers will look on with envy even though there’s only a V6 underneath the (somewhat deceptively large) hood.

Forget about buying the 412HP V8. You’ll rack up plenty of excessive noise and speeding tickets with the smaller block — and it’s 7k less.

That’s sort of my point. This car is a bargain. The fun starts out at $22,995, which includes all the important hardware of the V6, six-speed manual transmission, four-wheel disc brakes, and stainless-steel dual exhaust. That’s a cheap mid-life crisis remedy right there. A few more thousand and you can fit the car with several different appearance packages, including the Mustang Club of America edition that I drove.

But that’s not what the Mustang is really all about. The Mustang was the original pony car that championed the process of a low-cost “family” sports car. The first generation utilized many items from Ford’s parts bin to keep suggested retail price down to $2,368 — a price tag easily reachable by many households. The Mustang might not be that affordable now, but it is, and has been, one of lowest costing sports cars available. The 2011 model, though, offers so much more power, ability and fun than any previous generation that you really should give the new crop of Mustangs a second look. 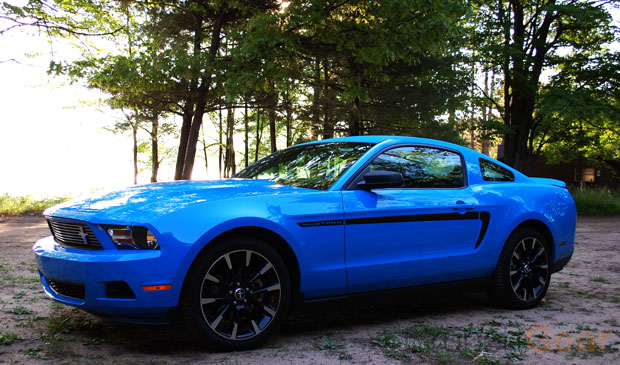 The Mustang has long been a comfortable daily driver. The advent of proper traction control a few years back even allows the Mustang to be cold weather capable. The new models don’t break that mold. The 2011 Mustang makes a fine cruiser, one that’s actually gentle on the gas with an EPA highway rating of 31MPG. (see my averages below) It’s just fine in the city, as well. The new six-speed transmission makes for a bit more wrist work, but it’s smooth enough.

Yeah, the 2011 Mustang is a fine city car and probably wouldn’t mind living out its days in a quiet suburb, porting someone back and forth to work for years. However, living this way for the Mustang is like how an English Setter can survive chasing birds in a large fenced in back yard. It’s just not proper. Both need a wide-open space to live in the way their creators intended. 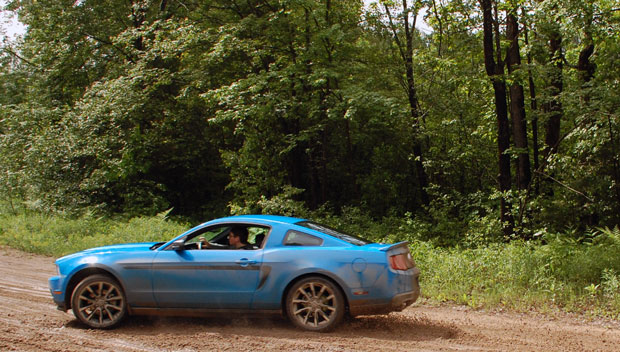 The Mustang was born to run free. It lives to tear up a gravel road and exploit its live rear axle. It wants nothing more than to power slide through corners, throwing dirt and rocks off its rear tires. It knows that this same live rear axle and rear-wheel drive configuration will keep it from winning any sort of off-roading rally race, but is fine with that fact. The older Mustangs proved over and over again having fun is just as important – and like I said previously, this car is simply fun.

I might go as far to say that this newer and more powerful Mustang is such retro fun that it would make even the most straight-laced banker grow out his hair, don a Twisted Sister cut-off t-shirt, and jam to some Grand Funk Railroad. But I won’t. We’re talking about the Mustang, not the Camaro, after all, and its drivers tend to derive from a Lynyrd Skynyrd sub-culture. Still, there’s no doubt that either of these next-gen pony cars will stir something up that you thought you left in high school.

Joking aside, the 2011 Mustang has a lot in common with the 2011 Camaro. They both offer six speed trannys mated with a 305HP engine (31mpg) in the Mustang’s case and a 304HP (29mpg) engine in the Camaro. They both start at $22k and both sport retro designs. They are, however, different beasts geared to slightly different demographics. But both are great vehicles worthy of at least a test drive. That is, of course, unless you were born with Ford-blue blood or received a Heartbeat of America tattoo before kindergarten.

It’s erroneous to say that the sports car has returned because, well, we’ve always had sports cars. American car makers have pumped out Mustangs, Camaros, and countless other muscle cars since the ’60s. What has returned is the low-cost and high-performance mixture that was missing for so long. The 2011 Mustang is full of annoying quirks that bug the hell out of me — 80 mph is at the top of the speedo instead of 70, the cup holders are in-line with the stick, the USB port doesn’t charge, the backseat is nothing more than an open storage compartment — but none of that really matters. This is a pure pony car and the only thing that matters is the large engine under the hood and the amount of fun it produces.