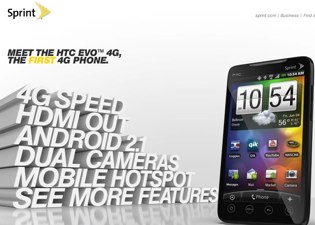 Let’s start things off with a disclaimer – I love Android phones. Last year I left the iPhone and switched to Android largely because of the amazing usefulness of Google Voice, and only Android devices truly let you take over your phone with a Google Voice app and have the perfect experience. I have extensively tested nearly all Android phones to date.

When MG reviewed the new HTC EVO, which is now selling out in the U.S., I wasn’t surprised he gave it a thumbs down. The device was too big in his opinion, the software too flaky. And the battery life isn’t just bad, it’s 90’s laptop bad. You need to be near a power source at all times.

But the commenters came at him anyway, attacking so viciously that they were actually starting to act like the evil twins of rabid Apple fanboys. “Android Fanboys Have Arrived,” quipped MG.

Well, I’m an Android Fanboy, and I’m telling you not to buy this device.