As expected, the iPhone 4 was announced today during Steve Jobs’ keynote at WWDC. Its flagship features are, of course, the extremely high resolution screen, video chat capability with FaceTime, and the sexy new form factor. But there’s more to the 4 than that, and even those seemingly self-explanatory new features deserve a closer look. Let’s see just what Apple’s done here with its biggest update to the iPhone since the original.

We’re all pretty familiar with the new body, since it was really the focus of Gizmodo’s exposé. In fact, that was pretty much the limit, since they couldn’t do much else with a dead, locked phone. But they examined it very closely and found it to be beautiful and metallic. Its new squared-off look is a signal from Apple that this is an entirely new phone, not just an iteration of the original. You might say this is the true sequel to the iPhone, the 3G and 3GS being merely refinements of the original design. Three years is a long time to stick with what was essentially the same design, especially for a company as chameleonic as Apple. A change was due, and the change is welcome.

The new design is more squared off, with a flatter back, creating a stronger shape in both your hand and eye. It’s not trying to hide the buttons, but rather showing off their careful placement and clean lines. I think the overarching themes here are power and superiority, rather than slickness. The glass on both sides, we found out in the closing video, is “almost as strong as sapphire crystal” and can deform pretty seriously without breaking. Good news to those of us afraid of exploding iPhones.

The previously reported dimensions are accurate: 4.5×2.31×0.37 inches. It weighs 137 grams, more than expected and slightly heavier than the 3GS. It’s similar enough in size and weight to the old one that you probably won’t notice the difference, but the new flat back and squared-off edges will either delight or bother you. I’m guessing delight.

The announcement that the steel rim of the phone is in fact the phone’s antenna nullifies concerns people had about potential signal blocking, like we have seen in several other Apple products.

My question is this: with all the miniaturization that’s gone on here, plus the improved screen, are we looking at a potential heat disaster? This is a serious consideration. Thinner, faster, and hotter generally go together when it comes to mobile phones.

The new 3.5-inch “Retina” IPS LCD display sports 326 pixels per inch, and is 960 by 640 pixels. They’re calling it “resolutionary.” Hmm — Apple puns. 960×640 will be a meaningless number to most people, but the resolution nerds among us will recognize three things about it right off the bat.

The PPI is higher than any display out there that I know of, and Steve says it even passes a threshold after which the eye cannot perceive a higher resolution. I’m inclined to believe him, as some who have seen it said they could barely even make out individual pixels. The contrast ratio is higher, too, at 800:1.

The screen is going to be a major selling point, and rightly so. Photos and videos will look gorgeous, and games will benefit as well, not to mention Netflix (!). Although now the developers’ job has become significantly more difficult, as they must keep three resolutions in mind if they want their app to be available on the new iPhone, the old iPhone, and the iPad.

The new 5-megapixel rear camera is a decent improvement. I complained recently about cameras trying to resolve too much detail on a tiny sensor, and the iPhone camera will continue to to that, I’m sure, but the larger lens can only make things better. The backside illumination, too, should really improve low light performance, as well as the LED flash.

iMovie: We’ve written it up in a little more detail here, but essentially you’ve got a powerful mobile timeline-based movie editor. That’s pretty insane. The interface looks pretty simple; you won’t be cutting together feature films with this thing, but you could certainly edit a home movie, and of course it’s perfect for sticking together multiple shots from your iPhone. It’ll cost $5 in the App Store — which seems kind of weird until you realize that it’s really sort of a premium add-on, and its themes and assets are things some users would rather just not have clogging up their phone.

We were all hoping for video chat with the 3GS and we didn’t get it — likely because Apple didn’t think it was ready. Even if it had, AT&T would probably have buckled. But now video chat is launching in earnest, and it’s called Face Time. It supports both the front and rear cameras, portrait or landscape, and works “anywhere there is WiFi.” No 3G video calling in 2010. It’s also iPhone 4 to iPhone 4 only right now. I guarantee there will be partnerships with VoIP providers, though. Apple has described it as “open,” though it’s never really clear what they mean by that.

Jobs demonstrated it by calling Jony Ive, and it appeared to work well, except the massive interference from hundreds of WiFi devices in the room caused some lag. Here’s hoping you don’t have 570 MiFis, EVOs, and tethered iPhones in your own home.

The front camera itself promises VGA, so it’s 640×480. That’s fine — I wouldn’t want any more on a camera dedicated to streaming video.

My previous post on iPhone OS 4 suggested that it contained everything you needed to know about iPhone OS 4. I stand by that statement, since any new features will not be for iPhone OS 4, but for the freshly-dubbed iOS 4, clearly a different beast. I mean, for one thing, you can now Bing stuff.

There’s also iBooks for the iPhone now. Not bad: the increased resolution puts the iPhone 4 almost in e-ink territory when it comes to sharpness of text, so this could be real nice. Native support for PDFs will be handy as well. Good news: all your iPad books will work on the iPhone 4 as well. No separate download or separate book.

It’s worth mentioning that IOS is already an OS, and one by Cisco to boot. It’s deja vu all over again!

iAd got another plug, and will be going live July 1st. Joy!

The iPhone 4 runs on the A4 processor, the same one that’s found in the iPad (or near enough). Jobs claims a 40% improvement in battery life due to the efficiency of the A4 (plus the 16% larger battery): 7h 3G talk, 6h 3G browsing, 10h Wi-Fi, 10h video, 300h standby. Nice. This will certainly be used for making better and faster apps, and you’ll be seeing a lot of that in new games. Speaking of which: 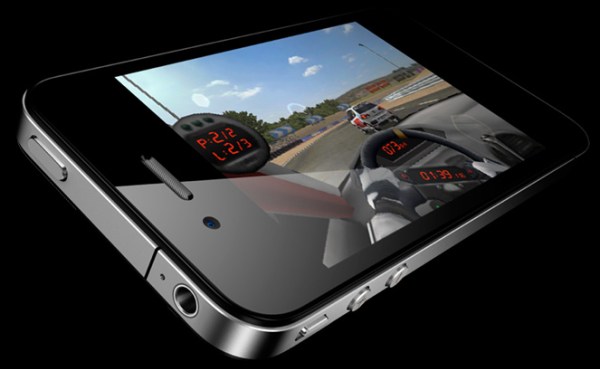 The iPhone already had an accelerometer setup that allowed for limited motion controls, but the new 3-axis gyroscope is “perfect for gaming” according to Steve. Take that, Nintendo! With the new screen and this improved controller, the iPhone may now actually be a credible threat to the big N.

Its output options are unfortunately limited compared with other devices: the dock connector will allow for a 1024×768 signal, which was nice in 2007. The iPhone 4 can play 720p files up to 30FPS, but HD output would have been nice as well.

It’s not exactly a marquee feature, but it’s worth noting that the Netflix app behaves much like the iPad one. Although I personally don’t relish the idea of watching an entire movie on my phone, but managing a queue and browsing movies will be a joy. Having an official Netflix environment from your phone to your tablet to your desktop gives the ubiquitous movie service a sort of special authority.

The entire iPhone 4 announcement can be viewed here, and here’s the design video, if you like that sort of thing:

Further developments can, of course, be found at the iPhone 4 tag, though I’ll keep this page up to date.