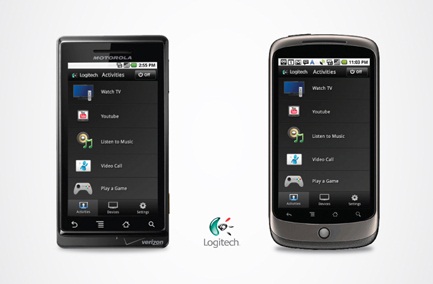 Google TV is all about blurring the lines between the web and TV — and ads of course. Logitech is playing a key role in this project by providing the oh-so-important remote interface, and the just-detailed Logitech Harmony Link goes way behind anything currently available.

Logitech Harmony Link is a bit different, though. It’s not a traditional IR blaster or even a remote, but rather hardware built into Logitech’s Google TV companion box that can read nearly any IR command and send it out to the appropriate set-top box or AV receiver. Since Google TV is always connected to the cloud, Logitech will be able to constantly push new device control schemes when they become available.

The system also builds in support for Android and iDevices. Free apps will turn phones into virtual remotes with all the bells and whistles found on Logitech’s high-end models. But we already knew that.

The platform will be open to developers, but to what extent is not yet known. It’s likely targeted primarily to home automation companies and other remote makers to allow the Google TV access to their devices as well. Both Google and Logitech are offering this all-knowing platform with a large degree of openness and seemingly wants everyone to come play.

Details are likely to continue filtering out until Google TV launches at least this blog post sheds a little light on how devices will talk to each other.