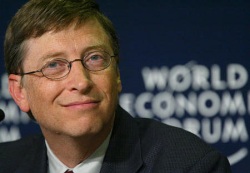 Bill Gates, the chairman of Microsoft, was on Larry King Live on CNN last night. (Larry King’s still on the air? Gotcha.) He was there with his father, William Henry Gates, Sr., and they talked about a number of fun and exciting things. And wouldn’t you know it, the iPad was one of those things. His take on Apple’s “magical and revolutionary” thingamajig? It’s “not quite there yet.” That’s fair to say, no?

We’re all trying to get to something that you just love to take to a meeting and use and it is not quite there yet. You need to have input. You need to take notes and edit things. Microsoft and a bunch of other companies are working on getting that final, ultimate product. […] It still isn’t the device that I’d take to a meeting because it has no input.

I do generally agree with Gates here, that the iPad is just short of being all that it can be, but not for the reasons he lists here. Like, what’s with Gates’ infatuation with making the iPad meeting-friendly, so to speak? Since when have Apple products lived and died by how well they do in the corporate environment? The average person doesn’t look at the iPad, and lust after all those Apps, but then say, “You know, if only I could bring this into my team meeting, then it’d be perfect.”

Note that this isn’t the first time Gates has given his thoughts on the iPad.

The iPad is a consumer device. People use it to watch Netflix movies, not to fiddle with spreadsheets or whatever.