YouTube has been dabbling with its own live streams for almost two years now. It’s live streamed presidential speeches, healthcare debates, cricket matches, and a U2 concert. But so far it’s stayed away from opening up live streaming to the general YouTube populace. The copyright liability would be insane.

Nevertheless, the shadow of YouTube hangs over the budding live video streaming industry, where startups like Livestream, Justin.tv, and Ustream are making their mark. Rumors persist that YouTube is planning to enter live streaming in a bigger way than it has so far. The screenshot above hints at what that might look like. I grabbed it from this YouTube help page for Google Moderator on YouTube. It shows the channel settings for a YouTube content producer (in this case, obviously someone who works for YouTube).  The last button, which I’ve circled above, is for “Live Stream.”

Max Haot, the CEO of Livestream, believes the screenshot provides”strong evidence that Youtube is about to launch a live streaming feature,” despite the fact that it looks like the “Live Stream” button is only enabled right now for YouTube employees. “We are not sure about their choice of name,” he adds.

The simple explanation here is that the screenshot, which was put up to illustrate a different feature (the Moderator module), comes from a YouTube employee with producer access to CitizenTube, the YouTube political channel that often shows live streams. Inside YouTube, that is the button they use when they want to run a live stream.

But the button is there, and if YouTube wanted to it could roll it out as a feature to trusted partners such as brands or politicians. In fact, YouTube is actively courting political candidates and their advertising dollars with all sorts of campaign tools. It would make sense to add live video to the mix. Live virtual town hall meetings could be very popular. Officially, however, YouTube says it has no immediate plans to do so. 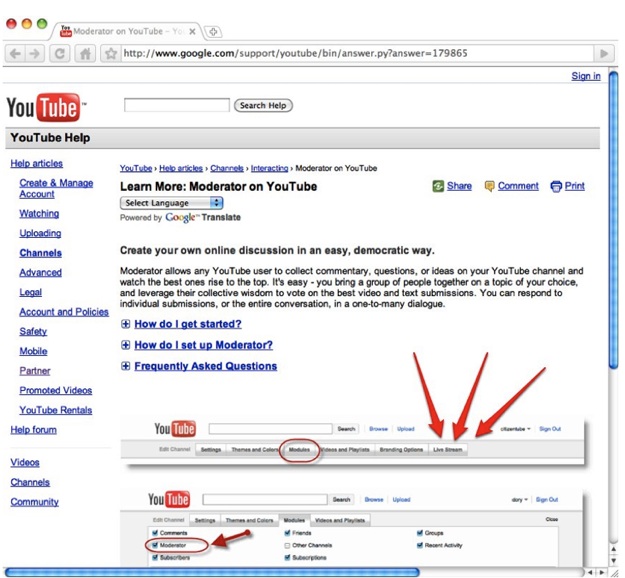