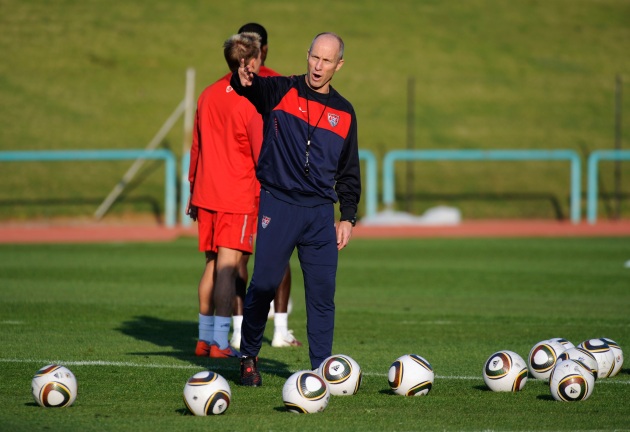 The lead developer of the Jabulani, the ball that will be used in the World Cup, has hit back at his noisy critics. Dr. Andy Harland, who helped design the ball at England’s Loughborough University’s Sports Technology Institute, says that what many players are complaining about now, that the ball “moves strangely” or whatever, can be attributed to using the ball at altitude. The ball has been around since December, and he has heard zero complaints until now. So what gives?

You’ll recall that several goalkeeprs, including those from Spain, Brazil, Italy, Chile, and England, have complained that the Jabulani behaves strangely in the air, and that the World Cup will be a disaster because of it. Whether that’s true or not, who knows? I mean, the World Cup could be a “disaster” in the Euro 2004 sense, where cynical and defensive play wins the day. That’s my biggest fear going into the tournament.

Harland says that the ball may move different than most goalkeepers are used to because, for the the first time, they’re playing at altitude. There’s less air way up there in South Africa, and if you’ve played your entire previous season at or near sea level, well, yeah, forces act differently on the ball now. If we took a “good” ball and played on the moon you’d hear complaints about how it moves, too.

It’s not entirely unexpected. Before every tournament players come out and voice their opinions. There are no secrets about this ball. The ball is designed to allow the very best players in the world to exhibit their skills

Could it be that goalkeepers are blaming the ball so that when they let in the inevitable soft goal, leading to their team’s elimination, they can tell the newspapers back home, “See, I told you. The ball is broken. It can’t possibly be that I made a mistake, or that my defenders were out of position. It’s the ball’s fault!”

Maybe we should get on with it and follow Spain’s Alvaro Arbeloa’s lead in calling the ball “round, like all the others”?