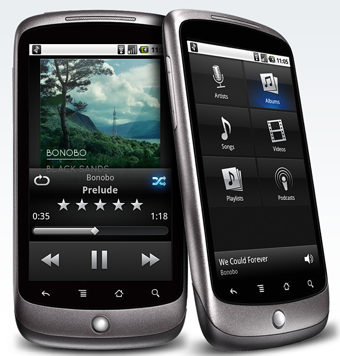 doubleTwist, the ‘iTunes for Android’ software that lets you sync your media files with dozens of devices, including Android phones, is one step closer to being a full-fledged solution for media sync on Android. The company has released a native Android application, available on Android Market for free, which offers users a polished media player capable of playing both audio and video.

Android is notorious for coming with a clunky default media player, and doubleTwist easily bests it, sporting a much cleaner interface, the ability to import iTunes playlists, and support for audio/video podcasts. That said, there are already plenty of third party solutions that also beat the stock Android player. So what makes doubleTwist different?

CEO Monique Farantzos says that the new doubleTwist Android player works directly with doubleTwist’s desktop software, in much the same way that the iPod and iTunes work together. Users can transfer ratings, playcounts, and other information back and forth between their phone and computer. Farantzos also says that online radio and support for wireless media sync (which would be big) are coming in the near future.

It’s worth pointing out that Android will soon allow users to stream their music from their PCs without having to physically connect their devices, but I suspect there will still be plenty of people looking to store and manage their media locally.