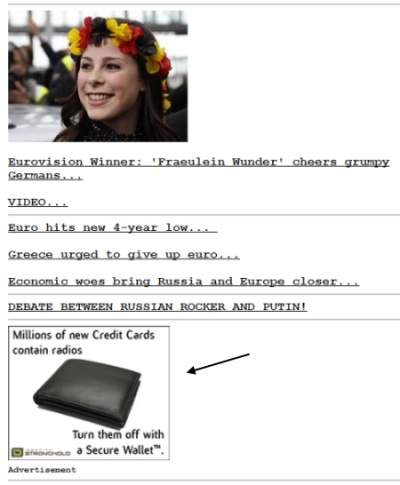 The following is in the interest of saving you money, which is probably my number one goal here at CG: preventing you from spending money when you don’t have to. I’ve seen ads on Drudge recently pimping RFID-blocking wallets produced by a company called Identity Stronghold. The idea behind the wallet is to block the RFID chip found in your credit card from being surreptitiously scanned. Now, I’m sure it’s a fine product and one that works as advertised; I have no “issue” with said wallet. But that’s partially why you can get away with not buying one: it’s fairly easy to disable the RFID chip in your credit card. What do you need? Nothing more than a hammer!

Before you break out any hardware, know this: your bank will probably give you a non-RFID credit card, and all you have to do is ask. I once got an RFID debit card from my bank, but requested a non-RFID one and it was sent along right-quick. So know that you can avoid all of this work with a simple phone call.

Another before-we-begin: what’s the deal with RFID? It’s a type of radio chip that’s increasingly being implanted in everyday documents. U.S. Passports now have them, and now many credit cards have them as well. They’re being sold with the idea that they’ll make your life easier. No need to swipe a credit card at the cashier, just wave it past the counter and off you go. The thing is, these chips are always on, so all it takes is one no-good kid to put together a rudimentary scanner and your private data can potentially be compromised. (That’s the point of the Identity Stronghold wallets, to shield the card’s chip so as to prevent unauthorized scanning.) So if you’re even the least bit privacy-aware, you may not want, at the very least, your credit card broadcasting your whereabouts 24/7.

OK then. So what’s the easiest way to “beat” an RFID chip? Smash it with a hammer! Yes, all it takes is a couple of whacks with a small hammer and the chip is damaged beyond repair. While that means you won’t be able to wave your credit card past the counter to pay, it does mean you’re protected from any evildoers out there.

You can also sorta stab the chip itself, which this video shows:

But again, it probably doesn’t even need to come to this. Don’t want an RFID credit card? Call up your bank. I’m almost certain they’ll given you an old school credit card without any hassle whatsoever.