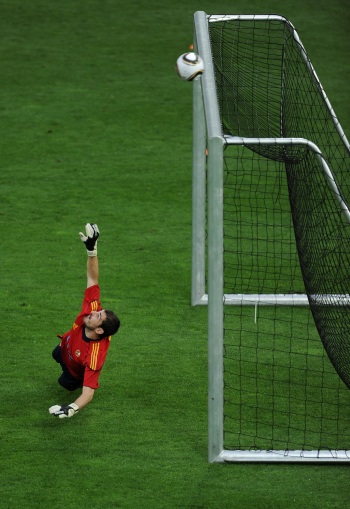 Right on cue, then. ‘Twas only a few days ago that I had mentioned the grand tradition of World Cup goalkeepers complaining about the ball used in the tournament, and we now have our very first complaints (at least I think it’s the first). Spain goalkeeper Iker Casillas, who’s probably the best goalkeeper going into the tournament (it’s either him or Júlio César, of Brazil), said after Spain’s 3-2 win over Saudi Arabia in a pre-tournament friendly about an hour ago: “It’s a little sad that in a competition as big as the World Cup to have such a poor ball [the Jabulani]. It’s not just the goalkeepers complaining, but the outfield players as well.” Here we go~!

Casillas, pictured here in an earlier training session, readily admitted that, yeah, goalkeepers tend to complain about the ball being used in big tournaments (the World Cup, the Euro, the Copa América, etc.) because “it’s new” and unfamiliar to them. During the domestic season, leagues around the world use different balls than the ones used in big tournaments. For example, in England, Italy, and Spain this past year the leagues used a Nike ball. So, asking goalkeepers to get used to a new ball in a very short amount of time—most teams will play one or two friendly matches before a big tournament begins, and that’s the only time goalkeepers have to get used to how a ball moves in the air, spins, feels, etc.—that there’s a bit of a shock period that has to be gone through.

San Iker then added that, while it’s usually only goalkeepers who complain, “luckily” this time the outfield players (i.e., the non-goalkeepers on a team) are complaining, too. He didn’t name names, though.

Was Casillas just upset that he let a dodgy goal in against relatively weak Saudi Arabia, or is MIGHTY SPAIN seriously having issues with the ball?

All I know is, Team USA just beat Turkey, who are approximately 8 million times better than us. You don’t see Jozy Altidore complaining about the ball, do you?

MORE A little extra looking around has found more complaints, including Chile goalkeeper Claudio Bravo (who called it a “beach ball“) and, in fact, Brazil goalkeeper Júlio César (who said it looks like it comes from “a supermarket“).