PostRank is a nifty tool that measures different ways that readers engage with online content. The ranking is based on how many times a particular post has been linked to, voted up on Digg, shared on Google Buzz, commented on, Twittered about, bookmarked on del.icio.us or viewed through feed readers like AideRSS and Google Reader. Today, the startup is adding a new feature that actually stores and shows you these activities.

As PostRank says, the activity streams feature similar in theory to a FriendFeed, but for a blog or site’s content. Previously, PostRank aggregated and reported activity events but the new feature aggregates Tweets, votes, distributed comments and more in a single view. Publishers simply have to insert their RSS feed into PostRank Analytics and the startup will aggregate and filter activity into a dashboard.

PostRank analytics is free for the first thirty days and only costs $9 per month after that. PostRank aggregates over 10 million daily activities from over 20 different social hubs, so it’s fair to assume that you’ll get a healthy snapshot of the different types of interactions that are taking place with your content. 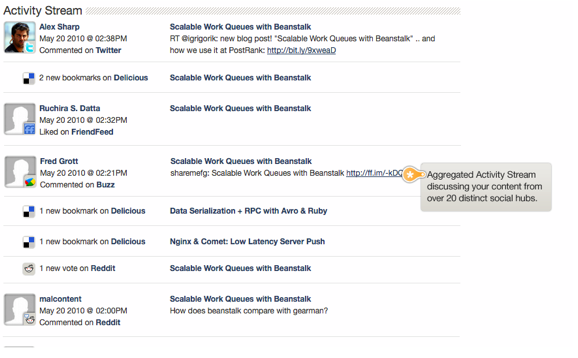