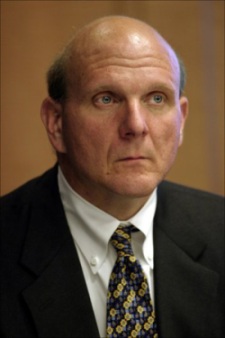 Oh, Microsoft. Don’t worry: people still love you. Also, people still hate you, so it all works out in the end. CEO Steve Ballmer told the Wall Street Journal something along the lines of, “So what Apple is now the “biggest” tech company in the land. Big deal. We still make incredible amounts of money. In fact, I’m going to go swim in my giant pool of money right now. Talk later.” An exact quote? No, but it certainly captures the spirit that Ballmer was trying to convey: let Apple have its moment in the Sun, but we’re not doing too bad for ourselves over here, you know?

This is the exact quote:

I will make more profits and certainly there is no technology company in the planet which is as profitable as we are. Stock markets will take care of the rest.

Then he justified his confidence:

We are executing very well. That’s going to lead to great products and great success.

Maybe, Mr. Ballmer, but not everything you guys do is golden. Some is, sure—I don’t know if you’ll find anyone who says “Windows 7 sucks!” the way they said “Windows Vista sucks!” and the Xbox 360 is still doing strong (though now without J. Allard…)—but your mobile lineup leaves a little bit to be desired. Where is Windows Mobile today? Your new Zune HD-like user interface may do well, but you’ve got a little while to go to catch up to the iPhone and Android. Considering that mobile is the future and all that…

But as an everyday end-user, why should I care what company makes more money? Who cares? All I’m looking for is a product, available at a reasonable price, that works as advertised. Whether that comes from Apple or Microsoft of some unknown start-up is irrelevant.