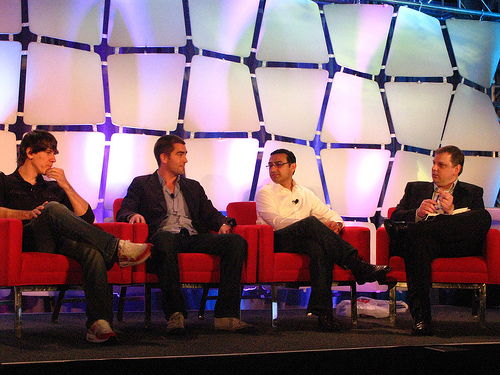 Today at TechCrunch Disrupt in New York City, Michael is on stage to talk about the future of mobile with Facebook’s Chris Cox, Google’s Vic Gundotra, and Foursquare’s Dennis Crowley.

CC: It’s been an intense and humbling couple weeks for us. We’ve spent a lot of time talking to advocacy groups. Mark wrote a post. Starting tomorrow we’ll be rolling out “drastically simple” privacy controls.

MA: What’s the go-to phone for all you guys?

VG: Incredible too. It’s the go-to phone for today because it’s really fast. And the Verizon network is awesome. Sprint has a great device too.

MA: I once threw a Sprint phone out a window because it was so bad.

MA: Remember when the guy from Google stood in front of my car?

MA: Why not the EVO?

VG: It’s not shipping yet. I did have one buy my wife took it from me.

MA: The phone I have is this (some crappy feature phone). It’s the new black. This phone cost $24. It had 300 minutes included — it makes calls that never drop. It’s like there’s a hamster in there that just keeps running.

MA: Sometimes you have to make a call, and it’s nice to have a phone that does that. What phone should be the perfect one for data? Should you just have a feature phone then the iPad? Do you need data everywhere you go?

MA: With the rise of the iPad, do we go back to simplicity in phones?

VG: You can have both.

MA; When are you going to have that phone?

VG: We have it, the Incredible.

DC: I have a problem with AT&T, but it’s not deal-breaker problems. I call my parents and grandma, everyone else I text.

MA: Let’s talk about location. Has Foursquare won? Are they the YouTube of location?

VG: I think there will be lots of players. I think Foursquare has done some amazing work with check-ins. But it’s early. Lots of innovation in the next year.

CC: I think they’re a winner right now – but it’s not a space where there are winners and losers. It’s a piece of context in a larger thing.

DC: I think we’re building great stuff — there is no winner. Think of where we are now to where we were 2 years ago. We’ve made the space more interesting. We’ve pushed things in a different direction. It’s experimenting in the space.

MA: What is it that people love to do?

DC: It’s all about giving people reasons to check-in. People love it for different reason. Some for deals, some for location history, some for badges, etc. We thought it would be one thing that caught on, but it’s all of them for various people.

MA: How many users?

VG: We don’t have check-ins. Latitude has 8 million users, 3 million active. It’s not the same thing. Nor is it on Buzz. With Latitude it’s background location.

MA: Is that a product for the masses?

DC: I don’t think the passive tracking model is for everyone. It skews towards families. We built Dodgeball without it because you couldn’t do it. Now you can, but I still think the right model is in the middle.

CC: Yeah but we offer Connect as well.

MA: When do you get into location?

CC: At some point. We’ll talk about it when we have a product.

MA: Are you putting a lot of thought into it? Do you know the model?

CC: I don’t think we know yet. A lot of things already have location element, like a status update, we just have to turn it on. But there are other things. How do we interact with things like Foursquare — we’re a platform company.

DC: We have Facebook Connect on the iPhone app, not the other platforms yet.

MA: Let’s talk about devices. What do phones look like in a year or a year and a half?

VG: In the 20 years I’ve been doing software, I’ve never seen a rate of innovation that we’re seeing now. You think you’ve seen the best, then a new one comes. Looking out a year — that’s a long time.

MA: Will the screens get bigger? The EVO screen is too big, no?

VG: For my daughter, to watch Disney, it’s the right size.

MA: Will it be ARM or Intel?

VG: I think Intel will try to make a push. Clearly ARM has the momentum.

DC: One that doesn’t run out of batteries. Passive tracking is on Android phones, but it kills the juice. Even push notifications drain the battery. The batteries need to get better.

CC: I want a phone you can talk to. You sort of can with Android phones. I don’t want to type SMS anymore. They should be contextually aware. Check-in to flights, find deals at grocery stores, etc. These things take a bunch of clicks now — it’s all wasting time. The phone should know what we want.

MA: Yeah, this phone (feature phone) lasts a week. And I don’t check-in on Foursquare with it.

MA: It’s great, it makes calls. Texts are hard. Vic, you guys should sell pre-paid phones with Google Voice at 7-11.

MA: I think you should listen to my business advice. Wake up guys! Okay I’m bringing something out to wake you up. Vic, you were on stage with Conan O’Brian recently.

VG: A neighbor thought it was a CGI trick — how did they make me look so small (laughs). Conan is really tall!

MA: Okay we have some phones to give away. I can give it to you Dennis or Chris?

MA: We have three of these. The first person who takes off all their clothes… Nah. If you truly think this is going to make your life better. (A lot of people). So we’ll do the best question.

Question: Can you explain on Foursquare the genesis behind the game mechanics? It changes user behavior.

DC: Yeah so when Alex and I were working on Dodgeball at Google — we realized it was a crappy one-person experience. So we had to make it fun by yourself. So we turned the city into a game. We made leaderboards, etc. Right before Foursquare I was working at a company called Area Code working on game design. That’s where a lot of it came from.

Question: We know Google’s model. But is Facebook evil?

Question: On Sunday night there was a piece with Marty Cooper and the original cell phone call made. He’s 82, you guys are the leading mind, but the answers weren’t good. Are you guys not innovative.

DC: I consider myself a product phone — it’s fun to look out, but that’s not what I do. We look towards what we know. It’s great to think about the future, but that’s not my job.

VG: I thought Chris’ answer was great — you phone should be a personal assistant. That’s clearly where we’re going. But people overestimate what’s possible in a year, and underestimate 5 years. These devices are going to be magical in 5 years.

Question: About Facebook privacy. I’m a senior in high school, I haven’t really heard anyone talking about them. No one in my high school is concerned about it. Is it just being pumped up in the tech news?

MA: No you can’t answer this question. Can I?

MA: It is overblown. I wrote an excellent post on it. We’re in a very transformative age right now. All of these guys are making platforms right now. It’s not trivial to do what they’re doing. There are issues around it, but not as big as we’re making it. And those Zuckerberg IMs don’t help things, cause every jumps on it.

CC: That’s not exactly how I look at it — we’ve gotten a lot of feedback. A huge part of what we’re focused on is about making the controls simple.

MA: How many have left?

Question: Is anyone doing anything with flash mobs to do things like Meetup in Foursquare?

DC: Not really. We’re just starting to see people using interesting things with that. Like political candidates to check-in and gather a crowd. We just talked to the Meetup guys for organizing our own meetups. We’ll start using their platform.

Jeff Jarvis: What is the definition of evil? Can Facebook answer that.

VG: You will have a device, it may not look like the devices today, but it will be there.

CC: Yeah Facebook Zero is a free data service, it pulls out images — just down to the basics. Hopefully it will be great in Africa. It’s hard to know what to invest in — a better Android app or Facebook Zero. It’s a tough question.

MA: What about devices in everyone hands. Clean water and a phone.

VG: These smartphones 3 years ago were $600. Today we have $100 price points. And that trend won’t stop. We’re going to have great tech in these new markets. But it’s about deciding where to invest.

Question: What about competition? Are you guys friends?

MA: Yeah, they were fighting in the green room.

MA: Not as tiny as TechCrunch though. (laughs)

DC: We look at using what these guys are doing.

Question: But what about when these guys do location?

DC: We’ve known about this for a while. These guys are platforms.

MA: It will be a federated model right Chris?

CC: Everything we build has basically been a platform. Users should bring their check-ins between services. We worked with Google on building the Android app for Facebook. It’s about establishing what you believe in, and making it happen.

Question:: Google TV will do what for mobile apps?

VG: I think one of the most exciting things about it is that the same Android apps you use will work on the TV. Like Pandora, play it on the TV.