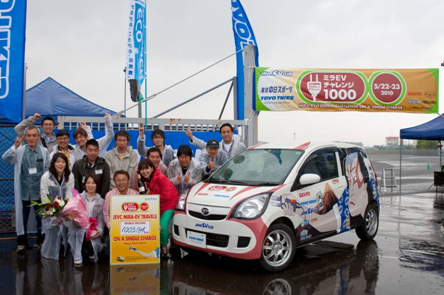 One of the biggest problems that stands between electric vehicles and becoming mainstream is limited battery life. But there has been some progress in that area lately: the Japan Electric Vehicle Club [JP], a civic group based in Tokyo, announced today a Mira EV customized by the group traveled exactly 1,003.184 kilometers without a recharge.

The club shattered its own record from last month when another electric vehicle drove 555.6km (345 miles) from Tokyo to Osaka on a single charge. The new record was made possible by driving the car at a driving course in Shimotsuma, Japan, which is apparently the world’s longest.

The club had a team of 17 people at the course who took turns at the wheel. It will ask the Guinness World Records to officially recognize the drive soon.