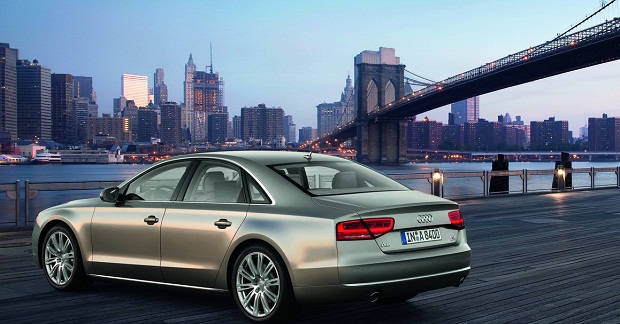 The Audi A8 is already a nerd’s wet dream with more gadgets and technology than any baby boomer can handle. But Audi wasn’t done with the available option lists, though. Now buyers can order an HSDPA hotspot modem directly from the factory. Unlike other options — like Autonet — this system is polished and seemingly beautifully integrated into the vehicle. This is the future.

Autonet is GM’s and Chrysler’s high-speed provider of choice. This system is a bolt-on solution. The self-contained device, just needs power and a subscription to broadcast WiFi throughout the vehicle. But while it’s a one-size-fits-all solution, it’s a tad ugly and Audi doesn’t do ugly.

Audi’s system is integrated totally into the vehicle. From the press release.

Using the WLAN hotspot is remarkably simple. To activate Internet access with speeds up to 7.2 Mbit/s, the driver merely needs to insert a data-capable SIM card into the Bluetooth online car phone. Alternatively, an Internet connection can be established via Bluetooth by using a compatible mobile phone with a SIM Access Profile. Any existing mobile phone contract can be used for this – often coupled with a flat-rate data plan.

So yeah, you just slip in a SIM card and you’re off. Hopefully Audi’s owner, VW, plans to offer this cross-platform rather than keeping it tied down to a $100k car. The world doesn’t need cars with Tegra-powered Google Earth navigation. But we need rolling hotspots and now.