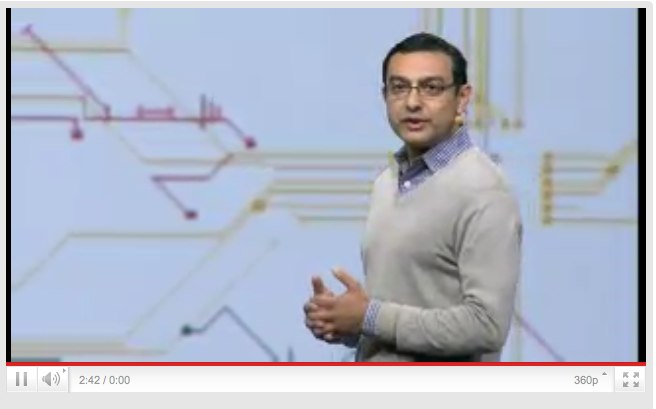 Google’s biggest developer conference is kicking off, and it’s starting with a 90 minute keynote that’s sure to bring some major news. My live notes from the event are below. Note that Google is live streaming the event — we can’t embed the video, but you can get to it by clicking on the photo above, or by going here.

-Google VP Vic Gundotra has taken the stage. He says that this is the third I/O and it sold out faster than either of the events before it

-The web is the most important platform of our generation. And it is the only one that belongs to all of us. It was at this conference. HTML 5 is taking off. The first spike is YouTube adoption. The second was Apple’s adoption — he jokes “I think it was a late night Steve Jobs email or something”.

About 24 months ago this effort had just gotten under way. By the end of this year all of these will be present in all modern browsers (room laughs because IE isn’t going to have implemented all of them by then). HTML5-capable mobile browsers are far outpacing other browsers (change happened around July 2009).

Now showing a demo of Gmail, used drag-and-drop (File API) to drag an image into a new message. Also showing use of notification API, with a popup tab.

-Charles Pritchard of MugTug has taken the stage. Has come here to preview latest software development, called Darkroom. Has disconnected his wifi to show that it still works. It’s a browser-based image editor, uses HTML5. Rotated the image, used red-eye effect. Is using Google Chrome. Application itself is using JavaScript and Canvas.

-Jim Lanzone of Clicker, which launched at TC50 has taken the stage. Is showing off how you can browse through available shows, with the page using HTML5. Can just start typing, and it will look for your query.

Pichai is back on the stage. Video is one of the most important forms of content on the web. We think video should have a great, free, and open option as well. We’ve been thinking hard about this problem. We’ve invested over $120 million in applyig On2 tech to accomplishing this vision.

On2 — We got to know this team last year. 2B+ installs. Optimized fort hew eb. Were impressed by VP8 quality. We serve over 2 billion video views a day on YouTUbe so we care about bandwidth. Overall we are really impressed with VP8. Today we are fully sourcing VP8 under a completely royalty free license. WebM = VP8 + Vorbis. Dev preview at webmproject.org

Mike Shaver, VP Engineering at Mozilla is on stage – Thanks Google for this huge investment in open web, open video. Now showing a ‘very small demo from the future’. As of today YouTube will be showing video as part of WebM beta. Started converting entire library. Mozilla has been interested in open video for a long time. We’ve seen what happens when the terms of a platform change at the whims of one organization and the web needs to be above that (the room starts clapping). We’re working at Mozilla to make sure every part of the stack is fast. VP8 codec takes advantage of multiple cores and low power devices. Will scale with us. Open video is now here in high quality. Now showing a neat demo called ‘Project London’. It’s a dynamic comic page — has video, moving text, scaling panels. Very nice looking, all in HTML.

Opera CTO Håkon Wium Lie has taken the stage. Three years ago we published a proposal for a video element on the web. Also published a manifesto. Syntax was easy (). Hard part was to find high quality open freely usable format. . has joined the list. We need for there to be an open and freely usable format for the web. I think webm is it. Demos opera running WebM. Can download WebM-enabled version now at labs.opera.com. We think that video being a first class citizen will join other content types. My prediction is that if we use these techniques we can get rid of half the images (use canvas, SVG, etc). To web community, I’d like to say, “start using this”. To Google, I’d like to say thank you. It’s very vicil of you to spend time and money getting WebM off the ground. I look forward to working with Google in the future to ensure web remains open to be used with all sorts of content. We believe that web access is going to be one of the human rights of this century. 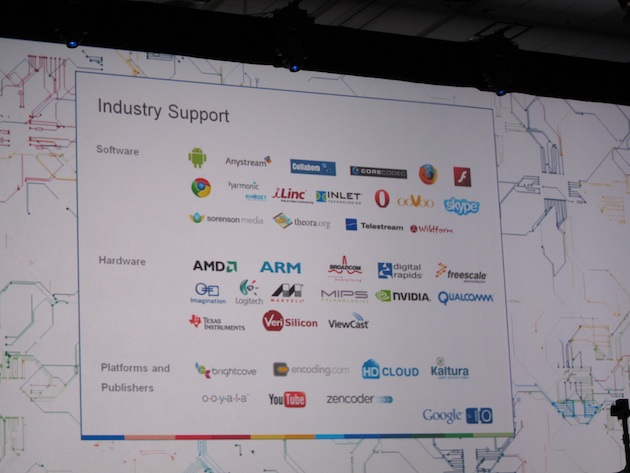 Kevin Lynch, CTO of Adobe is now on stage – HTML5 is great, it’s great to see what’s possible. At Adobe for over 25 years now been enabling people to express themselves. We’re really excited to work on that tech. Today I want to focus on HTML5 and what we’re doing in support of that. Showing Dreamweaver. Working with HTML5 and a new capability adding to dreamweaver CS5 called multiscreen preview, so you can see how it will look across different devices. Can quickly optimize one site for multiple screen sizes. Code completion for new attributions in CSS. Supports new transition effects. Can have graphic effects (make an image ‘fly in’ to a page).

One more thing is support for video. A lot of great work done in video on the web. We’re really excited to see VP8 work. We’re putting VP8 inside of Flash player. Going to distribute to a billion people in less than a year of its release. We’re going to really help push out the VP8 codec. We’re excited to see what people are going to do.

Pichai back on stage. A couple problems on the web. It’s very hard for users to find web applications. In early days users could just go grab them off the shelves. There were sites like Download.com for downloadable apps. Turns out it is very hard to find web apps. Let’s try to find a great chess game on the web. There are many great ones on the web. But hard to find one. But you can’t see ratings, reviews. It’s much easier to find a chess game on a mobiel phone.

Second problem. Developers need discovery, reach, monetization. Today advertising is the primary form to monteize. We want to create other alternatives. It should be easy to create and sell a premium app on the web. Early preview of Chrome web store.

New tab page of Chrome- icons for web apps. Click it, go to Tweetdeck (which has a completely HTML5 version of web apps). Notification API. All done using HTML5 in the browser. Back at tab page.

Another game — Lego Star Wars. Worked with Unity Technolgies. Showing Lego Star Wars. Working demo in their sandbox of porting this game on top of NativeClient. Most game engines are written in Native Code, but now you can use something like NativeClient to run directly in the browser. Full 3D game, very rich. A lot of HTML5 APIs.

Another important class of applications is around content. Newspapers, magazines. Terry McDonnell of Sports Illustrated now on stage. My brand, SI is a monster traditional brand. Not just SI, every one of iconic brands, People, Fortune, Time, are changing. Showing a demo from the Chrome Store — it’s a version of SI taking important things in the magazine and translating so they’re even more enjoyable. Photographs in a nice slideshow. Tightly edited, curated free open social searchable take on sports. That you can customize for yourself by rearranging it. Will have live video feeds. Live news, live scores. All built on foundation of strong journalism, informed opinion. And additional content that will pull you in further. Showing a boxing article with embedded video. At bottom you can drag, drop items to a video playlist. At bottom of page can use a slider to jump between articles. Can open a contextual menu to dive deeper. Advertising — it can be so useful it can be content in itself. It’s not a new idea, but it would be new to actually deliver it.

Pichai back on stage. So who do you have in the Chrome web store? 70 million+ active Chrome users. Web store will be there in Chrome OS as well. Will support both free and paid applications, 40 languages. Will bring it to Chrome dev channel soon. We support standard web tech, so apps written for Chrome web store will work in every modern browser out there.

Lars Rasmussen of Google Wave now on stage. Wave is starting to grow up. We’re opening Wave to everyone. Just go to wave.google.com and log in. We’re making Wave parts of Google Apps. Wave has been invitation only for half a year. We’ve seen if you have a group of people working on a project, Wave changes the way you work. Also — if you tried Wave already, it’s faster, more stable than it used to be. You can now get email notifications when things change, it’s easier to unread pieces of wave. Can remove a participant. A few months ago we launched API. We’re adding some top-requested features. Robots no longer have to live on App Engine. Adding media attachment features. Today SAP is announcing their product SteamWork will support Wave protocol. Today open sourcing components of the project, particularly in-browser editor.

David Glazer, Google Engineering Director, has taken the stage. He says that there are a few challenges with development— it takes too long to build apps. And employees work everywhere, on all devices. And apps are trapped — you get locked in to a deployment model that you may not be ready to lock yourself into. And there are too many apps to manage.

Paul Maritz, CEO of VMWare on stage. Most of you know vmware to take existing/legacy apps, and letting them work through virtualization. Last year we acquired Spring framework. We approached Google and said wouldn’t it be great to offer Java devs a great way to write apps. Spring being integrated with Google Web Toolkit. Also combining Spring’s Insight (which tracks server speed) into Google’s Speed Tracer for GWT. More on this partnership here. 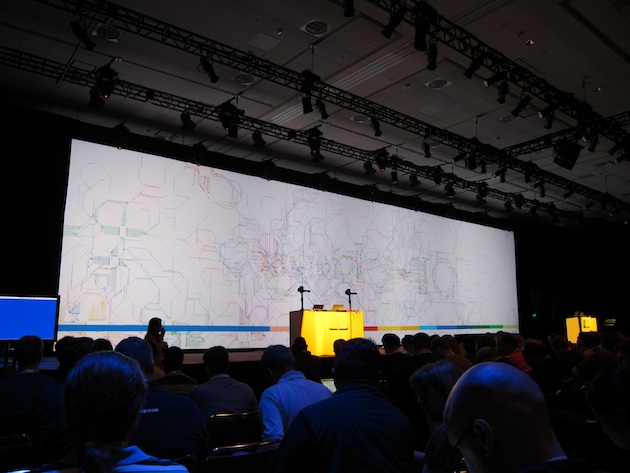