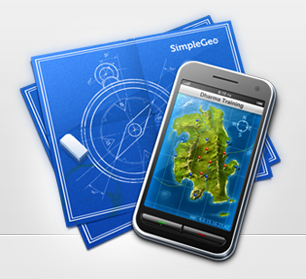 Today, Stump and Galligan are well into building out SimpleGeo, the location platform company that Crash Corp. turned into. That transformation started only a little over 6 months ago — and it may turn out to be one of the smartest pivots for a startup in years. SimpleGeo has just closed a new $8.14 million round of funding. And they’re announcing five new hires to go along with it.

The company’s Series A round pushes their total funding to just about $10 million (their $1.5 million seed round happened at the end of last November). This round was led by former backer Redpoint Ventures, with previous investors First Round Capital, Lowercase Capital (Chris Sacca’s fund), and Ravi Narasimhan also participating. SimpleGeo also picked up new backer, Foundry Group, in the latest round.

The money will be used to build out datasets, improve the API, and continue work on a new product they’re working on (for the API), Galligan tells us. The funds will also give the fast-growing company two years of burn — and that’s factoring in significant headcount increases, Galligan says. That’s good planning, considering how quickly the startup is adding new team members.

The immediate thing that sticks out about the five new hires announced today is that four of them come from the same place: Digg. As we mentioned, Stump used to work at Digg, but there was no funny business going on here, as three of them were a part of Digg’s layoffs earlier this month (a fourth left on his own). Included in this group is well-known designer Jeffrey Kalmikoff, who will now be heading up product development and design for SimpleGeo.

The others coming over from Digg include engineer Ian Eure, who will be working on Python infrastructure. Paul Lathrop, who will be a part of the Systems team. And Nicole Williams who will serve as the “Ambassador” of SimpleGeo — basically, taking care of all the logistics, facilities, and office management of the company.

SimpleGeo’s other big hire is Rob Bailey, who will be joining as the Vice President of Business Development. No, Bailey didn’t work at Digg, he comes from a company he co-founded called Delicious Brands. Alongside BD, Bailey will be in charge of sales as well, we’re told.

Two months ago, SimpleGeo hired 5 people to bring their total headcount to 13. Now, as they’re pushing 20, it’s time for another office. The startup has just signed a lease for a second office that will open in mid-June in San Francisco to go along with their headquarters in Boulder, CO. The team will be evenly split between the two cities for now, but Galligan foresees the San Francisco office quickly becoming the larger one.

With seemingly everyone in the technology space interested in location-based services right now, SimpleGeo finds itself in a very good position. Ever since Twitter acquired Mixer Labs (makers of GeoAPI) back in December, SimpleGeo hasn’t had a lot of competition in its space. They now have over a terabyte of geodata at their disposal to serve up to other startups who wish to use their plug-and-play packages.

“The new version of the API will scale better, work faster, and include more redundancy and servers around the world,” Galligan says. There will also be a new pricing model with this new API to fit different business models. This should make the service cheaper as well, Galligan says.

Not bad for what should have been an alternate reality gaming startup celebrating its first birthday.