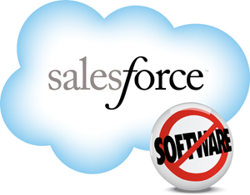 Microsoft has filed a lawsuit against Salesforce.com, alleging that the CRM company is infringing on nine of its patents. The move is somewhat surprising, as this is only the fourth time that Microsoft has sued another company for patent violations (though it has been the target of plenty of them). Here’s the statement from Horacio Gutierrez, Microsoft’s corporate vice president and deputy general counsel of Intellectual Property and Licensing:

“Microsoft has filed an action today, in the U.S. District Court for the Western District of Washington, against Salesforce.com for infringement of nine Microsoft patents by their CRM product.

Microsoft has been a leader and innovator in the software industry for decades and continues to invest billions of dollars each year in bringing great software products and services to market. We have a responsibility to our customers, partners, and shareholders to safeguard that investment, and therefore cannot stand idly by when others infringe our IP rights.”

The relevant patent names are:

According to Cnet, in January Salesforce revealed in an SEC filing that “a large technology company” was accusing Salesforce of infringing on its patents. At the time, Salesforce was in discussions with the unnamed company and no litigation had been filed. Sounds like those negotiations didn’t work out. Salesforce declined to comment.