Just four months after a major investment from Japan’s SoftBank, Ustream has officially launched its Asian arm. The live broadcasting site unveiled Ustream Asia this Monday, a joint venture with TV Bank Corporation (a unit of SoftBank). Ustream is also rolling out two new Japanese apps for the iPhone, a viewer and a broadcaster, specifically made for the market. The roots of Ustream Asia will be based in Japan but the company plans to expand to the greater Asia Pacific region.

Under the deal, Tomoraka Nakagawa will serve as CEO of Ustream Asia. Ustream will own 32% of the venture, TV Bank takes the majority with 60%, and venture firm DCM holds 8%. 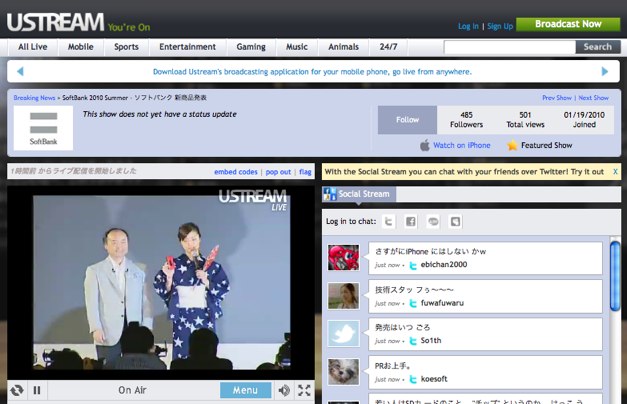 “The number of Internet users in Asian countries is growing dramatically, and Ustream Asia will be a live video distribution platform for this huge market,” Softbank’s CEO Masayoshi Son said in press release. “In Japan, the number of Ustream users is growing rapidly, so I am excited for this business opportunity in Asian countries including Japan.”

Since early 2010, Ustream has been preparing for a major Asian expansion. The company has frequently reiterated its commitment to the region, especially Japan, and China, Korea and India. In January, Softbank agreed to invest up to $75 million in Ustream by 2011. The Japanese telecom and media giant has completed the initial investment of roughly $20 million (a 13.7% stake). According to Monday’s press release, SoftBank will inject $10 million in June and is on track to complete its full $75 million investment by July 2011. That investment will make SoftBank the company’s largest shareholder, with over 30% of outstanding shares. Ustream has been a magnet for capital, the company has so far raised $87.8 million (assuming Softbank completes its investment), putting its valuation at roughly $230 million.

As a prelude to Ustream Asia, the company also launched a Japanese site last month. By creating a tailored experience for its Japanese consumers, Ustream has enjoyed a major surge in traffic: in January, the company logged 1.8 million visits from Japan, in April that soared to 5.2 million.

Video of the announcement.