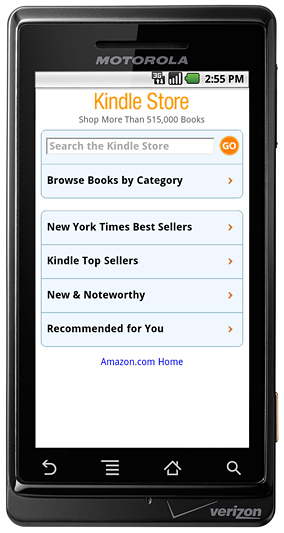 Easily one of my favorite apps for the iPad is the Kindle app. Weird, I know. But in some ways it’s superior to the iPad’s own iBooks experience. You can sync it across multiple devices, for example. And this Summer, that will also include Android phones. And there’s a nice big bonus for that platform too.

Amazon has announced tonight that Kindle for Android will available in the coming weeks. For now, they have this landing page to tell you a bit more. The big news: you’ll be able to buy books right from Android devices.

For anyone who has used the Kindle app on the iPhone or iPad, not being able to do that is one of the big annoyances. If you want to buy anything, you’re kicked out of the app, back to the web, to make the purchase.

Yes, it’s silly. But both sides likely put up with it for their own reasons. From Apple’s perspective, the Kindle Store directly competes with its own iBookstore. From Amazon’s perspective, there’s no way they’d pay Apple a 30% commission to sell their titles as in-app purchases.

This could be a killer feature for the Android version. Amazon has to know that its hardware strategy isn’t sustainable. It simply can’t compete with the likes of Apple and the dozens of other hardware manufacturers who are about to enter the tablet space in a major way. But by spreading quickly to all of these other platforms, the Kindle Store store seems poised to live on — and possibly even thrive. Even with direct competition from Apple.

Alongside the iPhone, iPad, and now Android phones, Amazon also has a Kindle app for PCs and Macs, as well as BlackBerry devices. And again, everything can be synced across all devices — a universal bookmark.

A few notes about this version from Amazon: