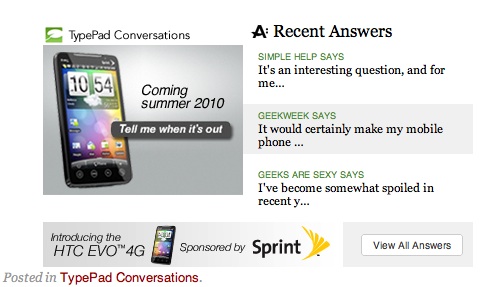 Ever since this whole blog thing started to take off, marketers have been trying to horn their way into the conversation. It started out as crude pay-per-post schemes, and then evolved into more subtle “sponsored conversations”. Once Twitter and Facebook took off, some of those conversations also were for sale. It got so bad, the FTC had to get involved.

Now Six Apart is launching its version of sponsored conversations, which it calls TypePad Conversations. The trick to this type of marketing is to strike a balance between creating authentic online conversations and creating advertorials. The way Six Apart is trying to strike this balance is by getting bloggers to put up posts asking their readers general questions about a topic related to the advertiser’s interests. So Sprint, which is the launch advertiser, is advertising an upcoming HTC 4G phone by getting bloggers to write posts asking questions such as: “Do your kids respond better and faster when you text or call them?”, “If you could connect up to 5 devices at a time using just your mobile phone, how would that change how and when you access the internet?”, and “Is technology making us better or worse at communicating with each other? How so?” I fear the answer to the last question is “worse.”

The bloggers don’t get paid directly for the posts, but below each one is an ad unit showing a display image of the Sprint phone next to a stream of comments from across Six Apart’s blog network from people answering the same question. For some reason, Six Apart calles this ad unit the “Awesome Bar,” even though it is a square, not a bar. And it is not particularly awesome. It reads like an ad, and people will block it out just like they do most other ads online. It is wallpaper. Bloggers get a revenue share from the ad unit.

The program was rolled out today. Blogs such as Betty Confidential, GeekWeek, and Jessica Gottlieb are participating. The advertising program is open to bloggers on other platforms as well, such as WordPress.

Thankfully, Six Apart isn’t trying to get bloggers to spark conversations about the advertised products themselves, at least not with this first campaign. As forced as they tend to be, sponsored conversations are not going away as long as marketers think they can somehow capture some of that social media buzz.

I get the concern over whether these conversations will be “forced.” We don’t think it’s a good idea to have brands ask questions specifically about their products. This is about giving brands a unique way to connect with people that match their target audience and are thinking about their category, not about trying to force a conversation about a product. (An exception *may* be entertainment products, like movies and TV shows, where people often really do want to talk about the product.)