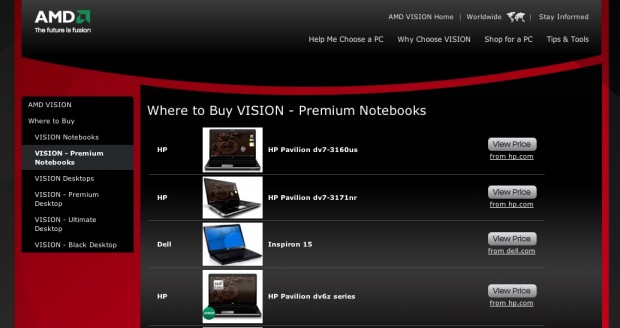 Remember back in the day when you could go into a store and compare two clock speeds and come out with the right machine for you? Everything else was immaterial. Hard drives could be upgraded, memory could be added, but clock speed was the number you lived or died by. 1.8GHz was better than 1.5GHz every day of the week, right?

Those days are over. Moore’s Law, the idea that “the number of transistors that can be placed inexpensively on an integrated circuit doubles every two years” is nearly over, which is why multiple cores are now appearing in consumer PCs. When you have multiple cores, clock speed doesn’t make any sense. A 2.5GHz quad-core machine, to the average Joe or Jane, seems to mean that the PC has four cores running at 2.5GHz each. That means it’s 10GHz, right? Right?

Wrong, but that doesn’t matter anymore. AMD – and, to some extent, Intel – has been moving steadily away from clock speeds for years and this is the year they leave them behind entirely. Take a look at AMD’s Vision page. This new naming convention offers choices based on use case. For example, Vision Premium offers the ability to:

Then, when you click on “Show me Vision Premium Laptops,” you are led to a list of PCs and laptops that are quite disparate in their power and specs. The assumption is that if a laptop falls under a Vision tranche, you’re good. The only number that now matters is price. If you pay more, you get a bit more. And if you want to dig into the specs, you can, but the only things that are going to change the price are the storage and memory components. The processor and, presumably, the graphics solution, will stay the same.

I, for one, welcome our Vision overlords. The question “What laptop should I buy?” can be answered with a wave of ones hand: go over there, pick a pretty one. That’s essentially what we’re dealing with these days, anyway, the commoditization of computing hardware. If the netbook revolution has taught us anything it’s that consumers don’t want power, they want the package. Let the geeks cling to their graphics cards and overclocking while the rest of the world wanders into Best Buy, drops a credit card, and wanders out happy.

I know I sound a bit facetious, but I’m not. This is 2010. Computing, in a way, is flat. When the iPad and its ilk are on the same level playing field as an Alienware monster laptop, you really can’t look at speeds and feeds anymore. The question now is “Does this do video?” or “Does this play games?” and you’d say, “Well, it has a 2GHz processor and discrete graphics and 4GB of RAM, so yes.” Now you say “Does it run Windows 7? Then it can probably run a few good games.” There are thousands of games, after all, and most of them run fine with a bit of coaxing. Do you want the ultimate in performance? Build it yourself or go for Vision Black. The choice is yours and it’s gotten much easier.

My hope is that Intel begins adopting this nomenclature for their processors as well. By segmenting the product line into a few understandable blocks, you reduce complexity and, in the end, assist the consumer more than anyone will ever know.