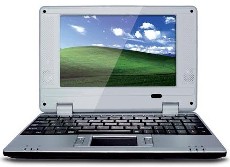 We haven’t heard from Cherrypal in a while; they’re the company that makes ultra-low-end computers for the developing world market. Remember when the OLPC market wanted to do a hundred-dollar laptop? Well, it looks like Cherrypal is actually doing it.

You can’t get much for $100, of course. They already have a laptop at that price, but this is a spec and OS upgrade. The new “Asia” version will have a relatively slow 533MHz ARM A9 processor, 256MB of RAM, 2GB of storage, and 3 USB slots. It has a 7″ screen and will run Android and focus on doing stuff in the cloud. Sounds pretty limited, but then again I haven’t tried that hard to rely on Android as my only OS. No pictures yet… just use your imagination, I guess. Should look something like the picture I did include.

There will be a larger version with a 10″ screen and webcam for $148. Couldn’t say which of these is a better deal for an impoverished nation.