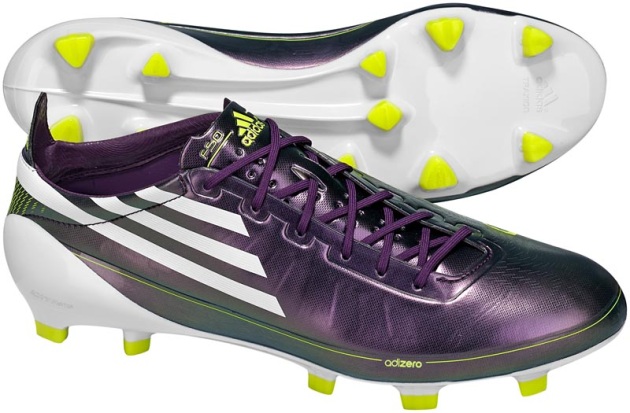 A little while ago I brought news of the super-duper technology that adidas’ kits (“jerseys”) will utilize at the World Cup. We all had a good time, yes? Well today there’s news of the boot, the F50 adiZero, that the likes of Leo Messi and David Villa (soon to be teammates at FC Barcelona maybe~!) and Jozy Altidore will use to score many goals. Adidas says it’s the lightest football boot ever produced by man! At this rate, we’ll be zipping around the galaxy using mass relays, knock on wood.

“How light is it?” It’s so light that a U.S. size 9 boot weighs a mere 5.8 ounces. It’s made of Polyurethane, a polymer that the Germans invented in the early part of the 20th century. Since it’s a single-layer design, there’s no need for any additional foam or padding or whatever. That helps reduce the weight, which makes it so that Messi and Villa can run at defenders right-quick.

Adidas even has a fancy quote from Messi himself: “I am amazed at how light the new F50 is; I can barely feel them on my feet.” Thanks, Leo! Please don’t screw up La Liga next week!

The studs at the bottom are also arranged in such a way as to maximize acceleration and stopping ability.

This is the launch commercial (good to see Zidane still getting work post-Materazzi!). I think they’re trying to get across the idea that F50 adiZero helps you run swiftly. Call me crazy…

Adidas will spread the F50 adiZero love, with players from all over the world wearing the boot during the tournament. Soccer fans will recognize the following names, whereas non-soccer fans will be like “Arjen Robben? Who the heck is that?” Shame. Anyhow, the following players will be rocking the boot: Jozy Altidore (USA), Jermaine Defoe (England), Solomon Kalou (Côte d’Ivoire), Leo Messi (Argentina), Shunsake Nakamura (Japan), Samir Nasri (France), Steven Pienaar (South Africa), Lukas Podolski (Germany), David Villa (Spain), and Johan Vonlanthen (Switzerland). I alphabetized those names to as not to be accused of playing favorites.