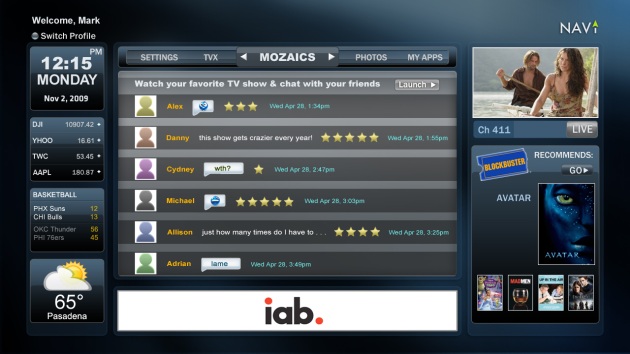 I, myself, would move to the cloud if it were at all possible. And by that I don’t mean move all of my vital digital services to someone else’s servers, but float up into the stratosphere and just hang out there for the rest of my days. When ActiveVideo Networks talks about moving the TV-viewing experience to the cloud, they are, in fact, talking about moving servers outside of your house for your own good, enabling what they call interactive video on demand. The overall idea is to make TV-viewing just interactive enough to make it more compelling without sacrificing the “idiot box”-ness of the medium. When you’re watching TV, you don’t necessarily want to break out GCC simply to change the channel.

The best way I can describe what ActiveVideo Networks is trying to do is to synthesize the best of old-style TV widgets and something like Plex or Boxee—no additional hardware required, of course. The company is working with several cable providers (including Cablevision in the greater New York City area) and, soon, a pretty big consumer electronics company. What company? I don’t know because the fancy cats at ActiveVideo wouldn’t tell me!

But no matter, there’s still plenty to look at right now, and there will be even more in the future. In addition to letting cable providers create simple, on-screen programs—think Blockbuster video-on-demand, being able to send “TV link” to your friends (“hey man, they’re giving a neat documentary about Ancient Rome on channel 271, check it out,” then a “link” pops up on their screen), end-users will be able to develop applications with a specially provided SDK. Maybe someone wants to develop a baseball widget/application, which you load up to see the entire Mets schedule from here until when they just miss out on the wild card in September? Shouldn’t be too hard to make since, like Paml’s WebOS, all you need is HTML and Javascript to make an application. 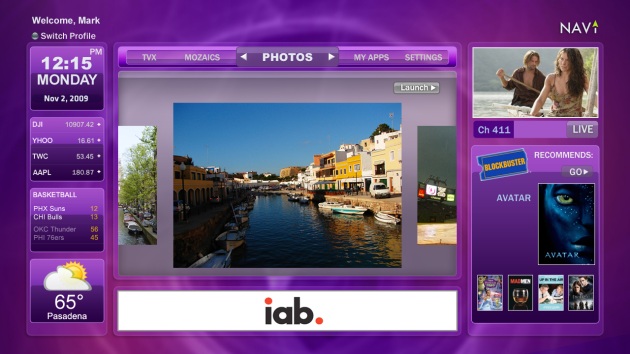 I should probably put a little more emphasis on the “TV link” deal, which doesn’t sound too crazy, and, more importantly, maybe even useful! It’s trying to make TV-viewing, which can be a solitary activity, into a more social one. It’s very Boxee-like in that sense. but instead of annoying your friends with tweets (that everyone can see—maybe you don’t want the world to know that you’re a huge Degrassi fan?) or Facebook (which is in the middle of a user exodus), you send them a direct link that’s easily selectable with your remote control.

You can see the interface right there. Believe me, I’ve been around the block a few times—that’s not half-bad.

ActiveVideo, true to its name, has recently acquired a company that specializes in cloud-based games. I don’t think that means you”ll be playing Rage or other that requires Direct X 11 or anything like that, but no one can deny that “casual” games are here, and they’re huge. Just like at Nintendo, feeling the heat from Apple of all people!

Probably the most important thing from here on out would be to see where ActiveVideo winds up. Will it hook up with an LG or Samsung or Vizio to bring the cloud to your next TV, or will it be limited to select cable systems? I mean, the ActiveVideo gentleman, as I mentioned several sentences ago, will be joining up with an electronics company in the near future, so, you know, that’s good for them.